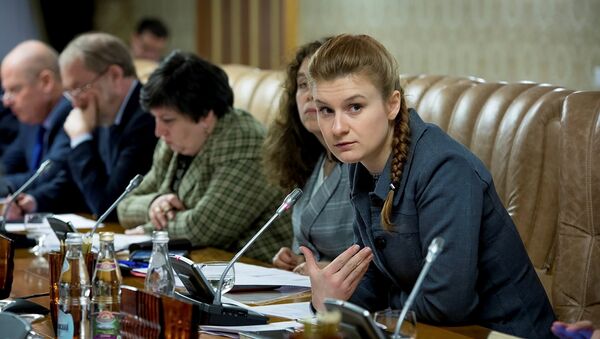 © REUTERS / Russian Federation/Handout
Subscribe
Maria Butina was arrested earlier this week on charges of conspiracy to act as a foreign agent and acting as an agent of a foreign government.

Sergei Lavrov has stressed "the unacceptability of the actions of the US authorities, who have arrested Russian citizen Maria Butina in the United States on the basis of fabricated charges, and the need for her early release," the Russian Foreign Ministry said in a statement.

Russian Foreign Minister Sergei Lavrov and US Secretary of State Mike Pompeo held a telephone conversation at the US side’s request.

"The minister and the secretary of state also discussed the situation in and around Syria, including the possible interaction of Russia and the United States with other countries to address humanitarian problems in Syria and the tasks associated with supporting the efforts to promote the denuclearization of the Korean peninsula," the commentary on the Russian Foreign Ministry’s website read.

Russia's Permanent UN Mission Joins Flash Mob to Support Butina Detained in US
According to the ministry, "following the Russian-American summit in Helsinki on July 16, the foreign ministers exchanged views on the prospects for further developing relations between our countries with a view to their normalization on an equal and mutually beneficial basis."

Maria Butina is a student from Russia who recently graduated from American University in Washington DC with a Master's Degree in International Relations.

Mikhail Fedotov, chairman of the Russian Presidential Council for Civil Society and Human Rights, asked the US Commission on Civil Rights' head Catherine Lhamon to make efforts to protect the rights and freedoms of Russian citizen Maria Butina, arrested in the United States, according to a letter published on Saturday.

"The Council is deeply concerned by the situation surrounding the young Russian woman. I ask you, dear Ms. Lhamon, to take into account our concerns and to make all necessary efforts to protect the human rights and fundamental freedoms in relation to Russian citizen Maria Butina," Fedotov said in a letter, as quoted on the council's website.

READ MORE: Russian Diplomats to Visit Maria Butina in US Detention on Thursday

On July 15, US authorities arrested Butina, 29, and charged her with both conspiracy to act and with acting as a foreign agent. Despite denying the accusations, the Russian citizen faces up to 15 years in jail.

000000
Popular comments
Interesting they arrested her one day before the Trump-Putin meeting. The timing sounds like a political message to Russia. The timing could be to sour the Trump-Putin meeting, to have another chance to tarnish Russia's image during this particular time. Russia should expect more dirty games such as this should they take Trumps offer and visit the US. More interestingly timed arrests may happen to tarnish Putin's visit to the US.