Pompeo: Trump Strong in 'Protecting US from Russian Aggression' 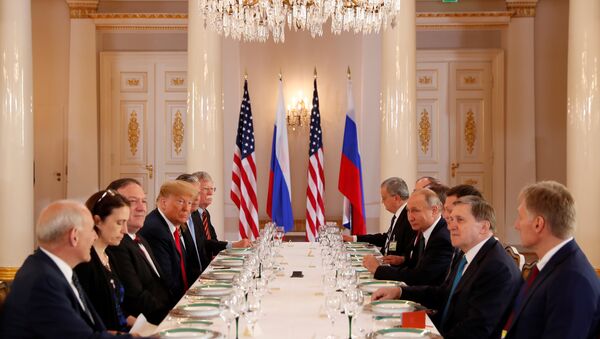 "This administration has been relentless in its efforts to deter Russia from its bad behavior… President Trump has been strong in protecting America from Russian aggression," Pompeo told Fox News on Thursday.

The state secretary claimed the Trump administration had inherited a situation from its predecessor where Russia was "running all over the US." Moscow has been accused of a campaign to change the outcome of the 2016 presidential election, which it denied.

.@SecPompeo: "This administration has been relentless in its efforts to deter Russia from its bad behavior." @foxnewsnight pic.twitter.com/xEq6pMO8Dl

Mike Pompeo also said he doubted that US and Russian presidents had made important verbal agreements at their recent summit.

“I’m not sure I take the Russian ambassador’s word for a whole lot. From time to time they want to tell stories,” Pompeo told Fox News on Thursday.

.@SecPompeo on @POTUS' meeting with Putin: "There was progress made on a handful of fronts: Agreements to try and work more closely on counterterrorism, an effort to begin conversations around arms control to prevent the spread of nuclear proliferation." @foxnewsnight pic.twitter.com/TXKvpNzgPA

The top US diplomat said he had a chance to talk with Trump about his private discussions with Putin in Helsinki last Monday.

“There was progress made on a handful of agreements to try and work more closely on counterterrorism, an effort to begin conversations around arms control,” he said.

Mike Pompeo told earlier EWTN television channel that Donald Trump was able to set up a channel for dialogue with Russia.

White House: Discussions Underway for Possible Putin Visit This Fall
"The President was aiming towards creating a channel for communication and dialogue, and he achieved that," he told the EWTN television channel.

Pompeo complained about "a lot of heat" following this Monday’s summit between the two presidents, who met behind closed doors in Helsinki. "The President had the objective of taking two countries that’d been on a bad path and trying to redirect that," he underscored.

Earlier in the day, Donald Trump told CNBC that he would be the worst enemy Russian President Vladimir Putin has ever had if relationship between the United States and Russia falters.

Pompeo: Trump Set Up Communications Channel With Russia in Helsinki
On Monday, Donald Trump and Vladimir Putin held their first ever full-fledged meeting in Helsinki, Finland. The two leaders discussed ways to improve bilateral relations as well as key issues of mutual interest.

However, Trump was accused of appearing weak as he stood next to Russian President Vladimir Putin in Helsinki after their historic summit, leading some to believe Russia had "dirt" on him.