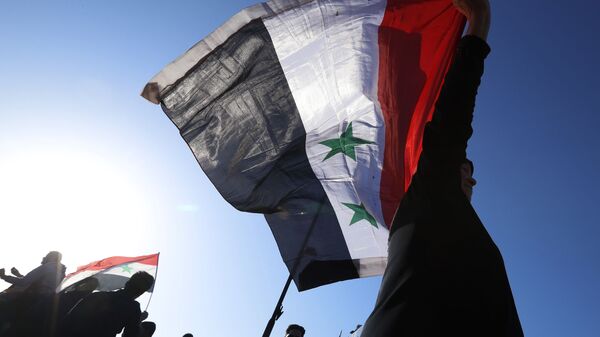 Thirteen officials including two former high-ranking ex-diplomats, members of the House of Lords, academics and religious leaders have sent an appeal to Prime Minister Theresa May urging her to reconsider her government's Syria policy.

The letter, obtained by The Independent, and published on behalf of the Global Network for Syria, voices concern over British, American and French foreign policy in Syria, "including support for armed opposition groups, attempted regime change under the guise of 'transition', the legal basis for recent airstrikes, de facto foreign occupation of Syrian territory, and the disastrous impact of sanctions."

The group, which includes Peter Ford, who served as the UK's ambassador to Syria between 2003 and 2006, and Lord Andrew Green of Deddington, who served as ambassador between 1991 and 1994, says it fears "that the continuation of these policies will not contribute to the stabilization of Syria, as it is claimed, but will ensure that stabilization and reunification under a unitary authority remain a distant possibility, prolonging the suffering of the Syrian people and weakening the stability of the Middle East as a whole."

Syrian Army Seizes Daesh Depot With Israeli-Made Bombs in Hama - Reports
Signatories of the letter also include a former Archbishop of Cantebury, as well as Conservative, Labour, Liberal Democrat and independent members of the House of Lords.

Former ambassador Ford told The Independent that the letter was aimed at "draw[ing] attention to the risk of a new conflict, the pointlessness of continuing to apply sanctions to Syria when they haven't work…All sanctions are doing is damaging the Syrian people while doing nothing to hurt the Syrian government," he said.

Ford also suggested that in the current situation, "anyone who wishes to see the toppling of the Syrian president is not a well-wisher of the Syrian people." His removal, the diplomat stressed, would "create a void" and "open the gates for a re-emergence of the worst bigotry, extremism and the re-emergence of ISIS.*"

Baroness Caroline Cox, who visited Syria in 2017, said that Syrian people "fear that as there is no moderate armed opposition," Assad's ouster would "lead to another disaster similar to Iraq and Libya."

US-Backed Syrian Kurdish Forces Prepping Team for Talks with Damascus – Reports
In addition to their letter, the Global Network for Syria sent a paper they said outlines their concerns "in more detail and makes urgent recommendations" which would allow Western powers to reconsider their policy. The content of the paper has not be disclosed.

The conflict in Syria has claimed hundreds of thousands of lives and displaced over half of Syria's population. Last week, Damascus reached an agreement with non-Daesh affiliated militants in the southwest on their evacuation to northwestern Syria, making the latter the last major rebel stronghold in the country apart from US-backed Kurdish-governed areas in the country's northeast.

*AKA Daesh, a terrorist group outlawed in Russia and many other countries.