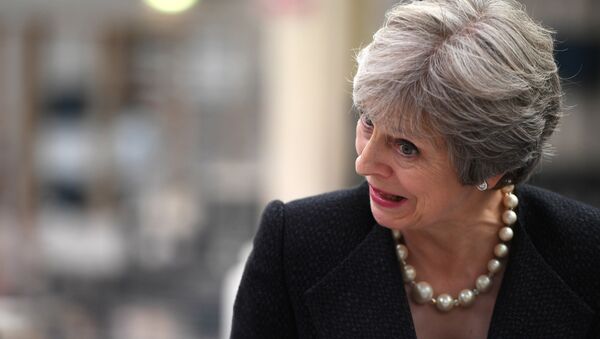 A summit in Belfast will see Theresa May give a speech on an Irish border solution, just a week after the government released its white paper on the post-Brexit UK-EU relationship, which faced a backlash from senior Brexiteers and provoked havoc in the UK cabinet.

On Friday, UK Prime Minister Theresa May is set to deliver a key-note address at Belfast's Waterfront Hall to rule out a hard border with Ireland after Brexit.

Theresa May will say that the EU's proposal to keep Northern Ireland within the customs union would be destabilizing for its economy.

"The economic and constitutional dislocation of a formal ‘third country' customs border within our own country is something I will never accept and I believe no British Prime Minister could ever accept. As they made clear this week, it is not something the House of Commons will accept either," she will say.

She is set to claim that Britain can negotiate new arrangements with the EU that would work "in our mutual interest", giving the UK control of "our money, our borders and our laws." This would also include "a brighter future for Northern Ireland — where we restore devolution and come together again as a community to serve the interests of the people."

Theresa May will also defend the Brexit plan she released last week, which proposes negotiating the closest possible commercial links for goods trade and to fulfil a commitment to avoid a hard border, saying that it is now for the EU to respond. "Not simply to fall back on to previous positions which have already been proven unworkable. But to evolve their position in kind. And, on that basis, I look forward to resuming constructive discussions," she will say.

Last week, the UK government adopted a white paper on Brexit, which envisages a new UK-EU free trade area based on a "common rulebook" for goods, which would avoid the need for customs and regulatory border checks. The document has sparked controversy among Tories, prompting high-profile Brexiteers Boris Johnson and David Davis to resign in protest against the document. The Irish government welcomed the publication, hailing it as "certainly a step towards a much softer Brexit."

In February, Theresa May rejected the EU's "backstop" proposal" which would keep Northern Ireland in the single market for goods, claiming that it would threaten Britain's "constitutional integrity."

Politicians have warned that the re-imposition of physical infrastructure on the Irish border, which still exists de jure, but sees no border posts or customs checks, when it becomes the EU's external frontier would anger nationalists in Northern Ireland who want to become part of the Republic of Ireland.