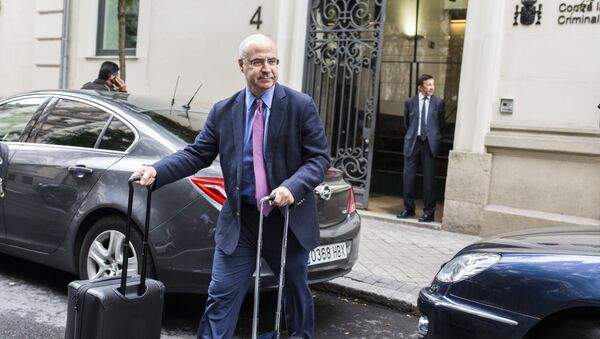 After Vladimir Putin said during his summit with Donald Trump that he expected Russia get the right to question the co-founder of Hermitage Capital Management, who was accused of never paying taxes on $1.5 billion earned in Russia, Browder claimed he feared for his life due to his role in the Magnitsky act.

William Browder, the CEO and co-founder of Hermitage Capital Management, an investment fund, has alleged in an interview with US broadcaster CNN that letting Russian agents interrogate him would cost him his life.

During the joint press conference in Helsinki, Russian President Vladimir Putin offered to let Special Counsel Mueller's team, which is probing alleged Russian meddling in the US election, into Russia to interrogate 12 Russian intelligence officials charged with hacking Hillary Clinton's Democratic Party during the 2016 campaign. In exchange, he expected Washington to give Moscow the right to question Bill Browder. The investment banker has never paid taxes on $1.5 billion his company earned in Russia and has donated $400 million to Hillary Clinton's presidential campaign out of that money, according to the Russian President.

Apart from Browder, the list of desired interrogation targets, later named by the Russian prosecutor general office, included former US Ambassador to Russia Michael McFaul and 10 other U.S. officials and intelligence agents.

Later the United States Senate voted 98-0 to pass a nonbinding resolution urging US President Donald Trump not to allow Moscow to interview US officials involved in criminal cases in Russia. The White House had ruled out the possibility in a Thursday statement from Press Secretary Sarah Huckabee Sanders before the vote took place.

Browder, who denied donating anything to Clinton’s campaign, claimed that he is being targeted over the Magnitsky act.

“Over a period of years, I’ve really gotten under Putin’s skin, because I’m the person who initiated the Magnitsky act, which has been passed now in the United States and 6 other countries, which freezes the assets and bans visas for people including kleptocrats and human rights violators, around Vladimir Putin,” he alleged.

In late 2012, the United States adopted the Act, which imposes travel bans and financial sanctions on Russian officials and other individuals believed to have been involved in the death of Magnitsky, to who Browder referred as his lawyer.