Does an Elected President or an Unelected Intelligence Community Govern the US? 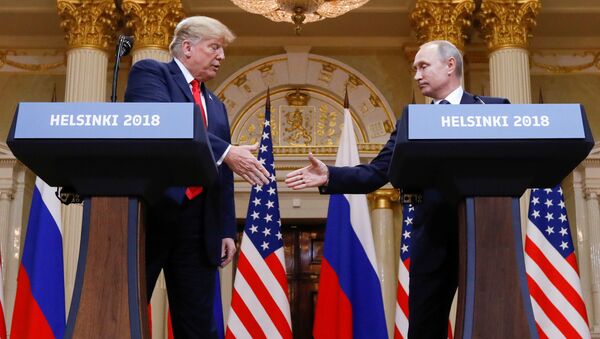 John Wight
All materials
The madness that gripped liberals and neocons within the Western political, media, and security establishments, over the sight of a US president having the temerity to treat his Russian counterpart – Vladimir Putin – as an equal rather than colonial vassal who knows his place, was and is more pronounced than anyone could have expected.

Indeed in the wake of the Helsinki Summit between US President Donald Trump and his Russian counterpart, Vladimir Putin, the tsunami of madness that ensued can only be described as unhinged. Treason, they cried — a surrender summit, they declaimed — to thus reveal that for such people peace and stability is tantamount to disaster while conflict and chaos is nirvana.

In light of this collective madness, spewed out from every mainstream US media platform in response to Helsinki, the backlash from within the Beltway reached such heights of intensity that we were witness to the astonishing sight of a sitting president going public with a mea culpa as he rolled back on his original denial — Trump claiming he had ‘misspoke' during his joint press conference with the Russian president when the question of Russian state interference came up.

It confirms that whoever runs America it sure ain't guy the people elect to run it.

Trump Says He Holds Putin Personally Responsible for Election Meddling
The sad reality is that the most important and universally anticipated summit between a US president and Russian leader at any time in history, including the Cold War when the Soviet Union was still extant, ended up being dominated by the ongoing Mueller investigation into alleged Russian interference in the 2016 US presidential election.

This, by way of a reminder, is an investigation which is yet to produce or throw up one scintilla of concrete evidence in support of these allegations of Russian state interference.

In fact the Mueller investigation into what many credible voices have put down to a leak from within the DNC rather than a hack from without — a leak undertaken with the goal of shedding light on the corrupt shenanigans responsible for ensuring Hillary Clinton's nomination over her Democratic Party opponent, Bernie Sanders, as candidate for the White House — has exposed a brutal truth: namely that the American people are passive spectators of the banquet of democracy in Washington rather than active participants.

READ MORE: Albright Goes Off on Trump, Calls Him 'Gift That Keeps Giving to Putin'

And if you'll permit me, while we're on the subject, in response to Trump's original assertion that he did not accept the conclusion of the US intelligence community that Russian interference did in fact occur, the tweet posted by popular Scottish comedian Frankie Boyle indubitably spoke for millions in America and beyond:

Trump, in his madness, being able to point out the truth that the US can’t trust its own intelligence agencies, seems to me positively Shakespearean

So, yes, Trump's opponents — led by Clintonite liberals whose sense of entitlement is consistent with ownership rather than service to a democratic process — are obsessed with the objective of ejecting him from office as soon as is humanly possible. And given the tenor of some of the rhetoric that has ensued in response to Helsinki, it would seem some are intent on doing so by any means necessary.

Trump on Twitter: 'Putin and I Got Along Well Which Truly Bothered Many Haters'
Worse, not only does the artillery barrage of rage unleashed in response to Helsinki leave no doubt that liberal/neocon America is bent on ejecting Trump from the White House before he serves out a full term, it suggests that it is set on conflict with Russia come what may. Because what we are dealing with here, ultimately, is a pathological attachment to the supposed verities of US and Western hegemony — with any state, country or government that dare resist it, even if on the basis of international law and the UN Charter, deemed beyond the pale.

References to Munich in 1938, to Neville Chamberlain's ‘peace in our time' moment, have been bandied around like confetti in response to Helsinki, reminding us of Talleyrand's observation of the Bourbons: ‘They have learned nothing and forgotten nothing'.

The Helsinki Summit was not a re-run of Munich in 1938. However US liberal and fanatical neocon reaction to it certainly evinces the character of 1914, when war fever had Europe in its grasp, leading inexorably to an abyss into which millions of young predominately working-class men were pushed not in the cause of freedom, liberty or democracy, but in service to national exceptionalism and imperial domination.

This is precisely the animal we are dealing with today, a beast of insatiable and unquenchable appetite that will brook nothing less than full spectrum dominance. It is why the takeaway from the Helsinki Summit is not peace in our time it is Russia delenda est — i.e. Russia must be destroyed.

US Media Smears Trump-Putin Talks to Thwart Cooperation With Russia - Analysts
As George Orwell writes in his classic novel 1984: "The enemy of the moment always represented absolute evil, and it followed that no past or future agreement with him was possible."

In the last analysis, for the likes of Republican Senator John McCain, a US president exchanging missiles with his Russian counterpart is considered more in keeping with strong and proper leadership than one who would rather exchange a handshake.

It is madness, insanity and moral sickness combined, evidence of an empire that has entered its mad dog days as it struggles to cope with states that are no longer prepared to accept US economic, military, geopolitical and cultural hegemony as the settled will of God.

000000
Popular comments
The US intelligence services, all 16 of them are the eyes, ears & fist of what today is called the deep state. They have been a plague on the US population since 1947 & they are still going strong.