'Don't Make Everything About Race!' Twitter Fed Up by Noah-France World Cup Row 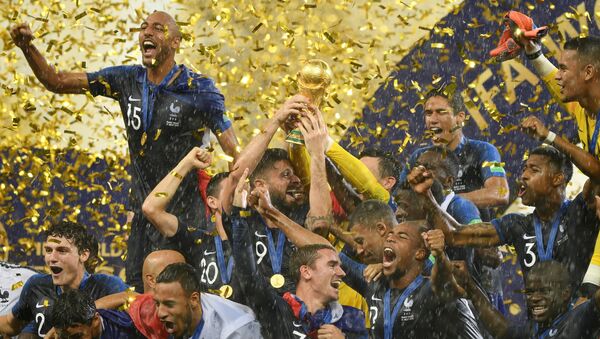 © Sputnik / Grigoriy Sisoev
/
Go to the photo bank
Subscribe
The Daily Show's host, Trevor Noah, has been forced to respond to a sharply worded letter from France's ambassador to the United States accusing the comedian of denying the French World Cup winners' "Frenchness" after Noah called France's victory an "African" one.

The French ambassador to the US, Gerard Araud, rebuked Noah on Wednesday in an official diplomatic letter, noting that "by calling [the French World Cup team] an African team, it seems you are denying their Frenchness. This, even in jest, legitimizes the ideology which claims whiteness as the only definition of being French."

The letter followed Noah's joke about Africa, rather than France, winning the World Cup. Reading back the letter to his audience in a stereotypical French accent, Noah challenged Araud's statement that "the rich and various backgrounds" of France's players was "a reflection of France's diversity."

"Now I'm not trying to be an ***hole but I think it's more a reflection of France's colonialism," Noah said.

As for Araud's "denying their Frenchness" remark, Noah suggested this was a reflection of the differing attitudes toward race and integration in France and the US. "This is what I find weird in these arguments that 'they're not African, they're French.' Why can't they be both?" he asked. The South Africa-born comedian praised America, saying that there "people can still celebrate their identity in their Americanness."

Noah's remarks sparked a backlash on Twitter, with users debating his sentiment and logic, and others accusing him of French-bashing and of trying to promote American superiority.

So rather than reinforcing racial stereotypes with silly accents you should try and educate yourself and your audience about different societal choices whilst understanding why the French players, though proud of their roots, consider themselves to be French and not African. 2/2

I really like Trevor but disagree with him on this one. I think it's problematic how Americans try to impose their highly raciallized views on identity, heritage and culture on other parts of the world where the discourse has historically been quite different.

Visibly you know nothing. All these guys were born in France except 2 who arrived as they were 2 years old. They learnt football in France. It is a shame to read this kind of comments from US citizens. US are a melting pot and so is France. Shame on you.

Double standard? France has transcended this petty Anglosphere obsession with race, and now they're getting 'called out for it?' Nice try, the reason the French insist on 'Frenchness' is to prevent the right wing from focussing on their 'Africanness'.

The Daily Show's substitute comedian tried to walk back his joke and just went on a ranty lecture. Somebody has a big ego and thinks he can do no wrong. French bashing used to be a right wing affaire, now it's become a left-wing thing.

Athletes have something called potential…that plus training is what makes them great. Same athletes in AFRICA, minus training, would not have performed the same. So question is not Africa vs France. It potential plus training in FRANCE, that won. Let's not make everything race!

You know you could have just explained how you just meant that as an African you rooted for the French team, instead of making fun of our accent or judging French culture by basically saying our culture is racist and American culture is less racist. That was ignorant and immodest

Can you please invite the ambassador of France @GerardAraud to teach you, respectfully, how France (a land of 1250 year immigration) is accepting duality in citizenship/origin and how all this differences unified us under the blue,white red (on the jersey of the french team)

000000
Popular comments
I agree with Trevor 100%, we all came from somewhere else and that is part of our heritage not all of it, Frances position is pure Racist by not acknowledging a persons background!