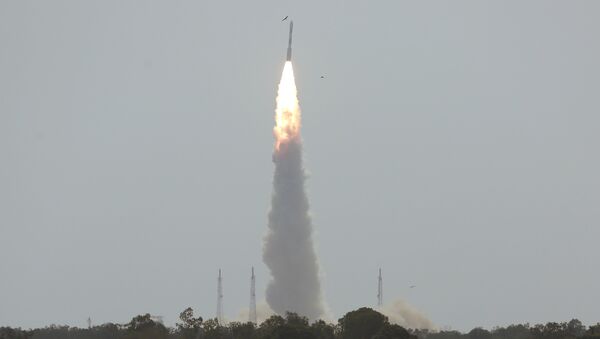 © REUTERS / P. Ravikumar
Subscribe
A consortium of private firms is expected to assemble 7-9 satellites per year. For the past few years, the Indian Space Research Organization (ISRO) has been encouraging the country’s private firms to undertake satellite and rocket manufacturing work so that the agency itself can focus on research.

New Delhi (Sputnik) — The Indian Space Research Organization (ISRO) has signed a three-year agreement with a private sector consortium led by Bangalore-based Alpha Design Technologies to assemble satellites in an attempt to increase the number of launches while building the capacity of the private sector. The other two firms involved in this agreement are Tata Group and state-owned Bharat Electronics Ltd.

Price War in Space: India Adopts Technologies to Reduce Satellite Launch Cost
Last year, the ISRO had issued a tender to the private industry to build 30-35 satellites over three years. The ISRO currently undertakes 3-4 launches per year, which it aims to increase to 16-18 satellites. The ISRO has been insisting that it's budget and manpower are not sufficient to increase the number of launches requested by the government.

"Our in-house capacity is limited. So we are looking to offload 30-40% of the work to the private sector," Dr. M Annadurai, director of the ISRO satellite center, said last November.

India is one of the few space-faring nations that has the capability to design, develop and launch state-of-the-art satellites using indigenously built launch vehicles.