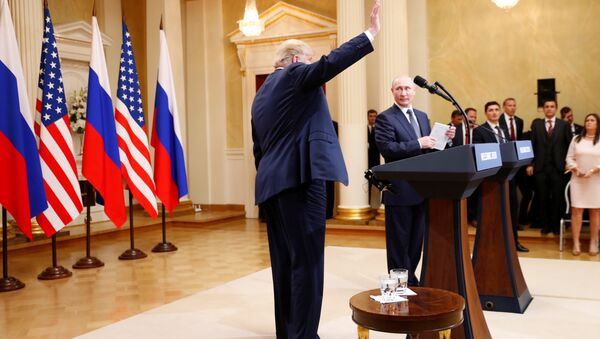 © REUTERS / Kevin Lamarque
Subscribe
International
India
Africa
Both media and political backlash being thrown against US President Donald Trump for his flip-flopping antics on whether or not Russia interfered in the 2016 presidential election suggests that the Land of the Free is heading toward an authoritarian route, historian and investigative journalist Gareth Porter told Sputnik.

POTUS spent a second day Wednesday attempting to reassure critics that he'd misspoken at the Helsinki summit on Monday, telling reporters that "there's been no president ever as tough as I have been on Russia."

"All you have to do is look at the numbers, look at what we've done, look at sanctions, look at ambassadors not there, look unfortunately at what happened in Syria recently," Trump told journalists. "I think President Putin knows that better than anybody — certainly a lot better than the media — he understands it, and he's not happy about it. And he shouldn't be happy about it, because there's never been a president as tough on Russia as I have been."

​Porter told Sputnik Radio's Loud & Clear on Wednesday that 45's decision to walk back his statements suggests that the US is going to be heading down a road where political heads won't be able to speak freely.

"To me, this is really the primary case study of how this political system is moving at a very rapid pace toward a rather authoritarian — very authoritarian — political caste, in which it's going to become much more difficult to take positions that are at odds with the extremely hardline new Cold War position of the combined political media and national security elites," the historian told hosts Brian Becker and John Kiriakou.

When asked what might be driving the media's persistent critiques of Trump, Porter indicated that it might have to do both with corporate media simply not liking the president and wanting to appease national security officials.

"There's no doubt that 95 percent of the corporate media is partisan against Trump and in fact feels personally that he's a menace to the United States," he told Kiriakou. "At the same time, I think that 100 percent of the corporate media believe that it is vital to the interest of those people who they are close to in the military, the intelligence agencies and the political elites, that the United States start a new Cold War with Russia and that it be pursued to the hilt both militarily and especially in terms of intelligence and counterintelligence activities on the part of the US government."

But would the media have reacted the same way if it was former US President Barack Obama who'd acted as Trump has? Yes, with maybe just some slight differences, according to Porter.

"If Obama had taken anything like in substance the position that Trump was taking… I think that the answer is pretty much yes," he said. "It would be very similar; it would be different, of course, but it would be strikingly similar."

Noting that Obama wasn't attacked or vilified for his meeting with Russian President Vladimir Putin in 2009, Porter indicated that the US' stance on Russia took a pivotal turn in 2014 when Crimeans made a decision and voted to reunify with the Russian Federation.

"The single most important watershed, if you will, was Ukraine and the fact that Russia took that kind of action… despite the fact that the US government was taking a strong position in the ‘Ukraine crisis,'" Porter explained. "This was both an insult to the US power on one hand and an opportunity on the other, and I would argue in a sense that it's the opportunity that's more important here."

"My guess is that that was seen as an opportunity to retake advantage of the situation to push for a major plus up in the [US] military budget for Russia and to play up the threat from Russia in a way that they could not do before that."

"You have sort of a continued growth in this idea that Russia is the enemy, that it's the new threat and a major challenge to the United States," the historian said.