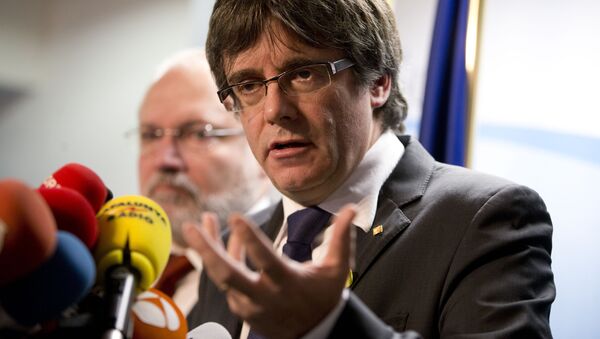 Earlier, Germany's superior court of Schleswig-Holstein state has made a decision to extradite the ex-head of the Catalan government Carles Puigdemont to Spain over accusations for graft.

Spanish Supreme Court has rejected the extradition of ex-head of the Catalan government Carles Puigdemont from Germany only over charges of misuse of public funds, without rebellion charges, the court said in a statement on Thursday. In the European extradition order issued by the judge, there were two charges — organization of rebellion and embezzlement of state funds.

Spain's Court Rejects Puigdemont’s Appeal Over Catalan Leader Election Law
In April and May, the German prosecutors announced their plans to extradite Puigdemont to Spain, where he is wanted for rebellion and misuse of public funds over his role in the campaign for Catalonia's independence.

However, a German court later ruled to release Puigdemont on bail, as it decided that extraditing the ex-Catalan leader to Spain on the charge of rebellion was not possible.

Last week, the High Court of Schleswig-Holstein ruled that the extradition of ex-head of the Catalan government Carles Puigdemont to Spain over misuse of public funds was possible.