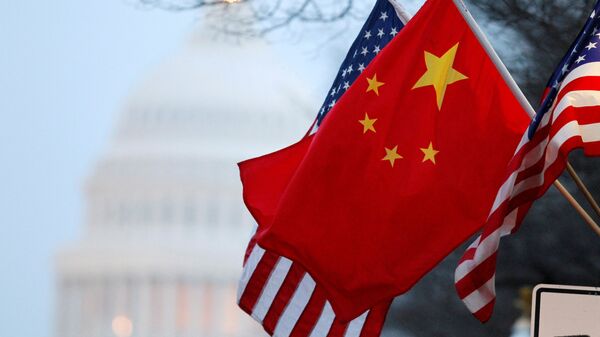 © REUTERS / Hyungwon Kang
Subscribe
WASHINGTON (Sputnik) - China is involved in a zero-sum game with the rest of the world on trade issues, White House Adviser Peter Navarro said in an interview on Thursday.

Navarro said the United States needs to protect its interests in artificial intelligence and other high-tech industries, which is what China has also prioritized for the next decade.

China is attacking the "crown jewels" of the United States in its alleged theft of intellectual property on technology, Navarro added.

China Says BRICS to Step Up Group Decision-Making Amid US Trade Row
On Wednesday, Trump's top economic adviser Larry Kudlow said Chinese President Xi Jinping has no intention of following through on any of the trade reforms the two countries have discussed during several sessions of negotiations and added that the talks have stalled at the moment.

On July 9, the US Trade Representative imposed 10 percent tariffs on another $200 billion of Chinese imports into the United States.

The Trump administration has slapped 25 percent tariffs on $34 billion worth of Chinese goods, prompting a similar response from Beijing.

In an earlier round of tariffs announced in June and actualized on July 6, the United States announced 25 percent duties on $50 billion worth of Chinese goods to which China responded by imposing restrictions for the same amount of US imports.