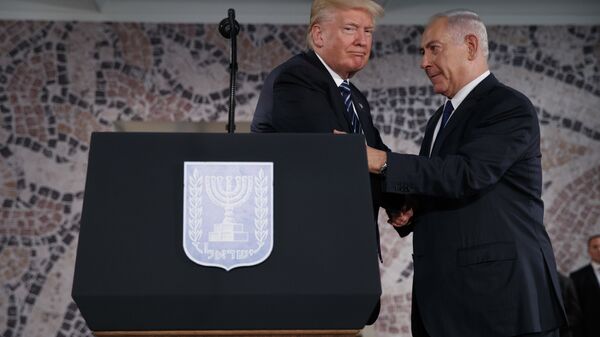 Israeli Prime Minister Benjamin Netanyahu was caught bragging at a dinner party about convincing US President Donald Trump to decline to recertify the Joint Comprehensive Plan of Action (JCPOA), or Iran nuclear deal. The explicit remarks confirm suspicions of many close observers.

The video, filmed in early July but only aired by Israeli public broadcaster Kan on Tuesday, shows Netanyahu speaking to senior members of his Likud party and some prominent activists.

"We convinced the US president [to leave the deal], and I had to stand up against the whole world and come out against this agreement," the prime minister says.

He and a guest then go on to chatter about the "disappearance" of the Iranian government. "From your mouth to God," Netanyahu appeals.

The revelation of Israel's role in the US reneging on the deal comes as no surprise to many. On April 30, just over one week before Trump's decision deadline, Netanyahu gave a high-profile presentation, with props and a backdrop of Powerpoint slides to boot, claiming to have evidence of Iran's secret development of a nuclear bomb in violation of the JCPOA. "Tonight I am here to tell you one thing: Iran lied. Big time," he said.

Later that day, US Secretary of State Mike Pompeo issued a statement declaring that Iran "lied about their program to the six nations who negotiated the Iran nuclear deal."

"The documents obtained by Israel from inside of Iran show beyond any doubt that the Iranian regime was not telling the truth. I have personally reviewed many of the Iranian files," Pompeo wrote.

World
Netanyahu Seeks to Prod Trump to Withdraw From Iran Nuclear Deal – Reports
"It's proven right what Israel has done today with the news conference. And Prime Minister Netanyahu just gave a very — I don't know if everybody has seen it, but I got to see a little bit of it. And that is just not an acceptable situation," Trump said later during the day at a press conference in front of the White House. "And I've been saying that's happening."

In a Fox Business segment entitled "Did Israel's Netanyahu convince Trump to exit Iran deal?" also from April 30, host Lisa Kennedy Montgomery declared that while Netanyahu's presentation was done in Israel, "if you read between the lines, it was aimed squarely at the White House."

"Today, we have definitive proof that this Iranian promise was a lie," Trump said on May 8 as he announced his cancellation of the agreement. "Last week, Israel published intelligence documents long concealed by Iran, conclusively showing the Iranian regime and its history of pursuing nuclear weapons.

Within an hour of Trump's announcement, Israel began conducting a heightened level of airstrikes on Syria, claiming to be hitting Iranian targets.

Almost exactly one month later, Netanyahu gave a speech at a London think tank declaring both the Iran deal to be dead and Syrian President Bashar al Assad "no longer immune" from "retaliation."