US Launches National Security Probe Into Uranium Ore and Imports 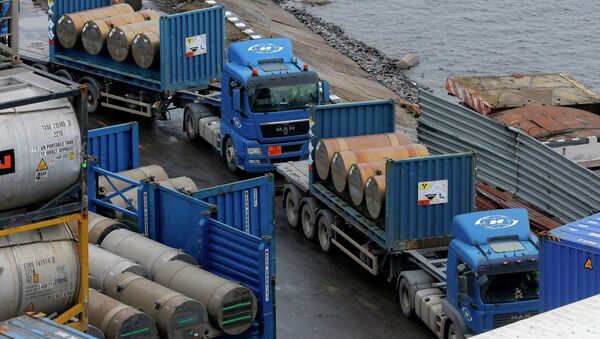 Earlier, US media reported that Washington was mulling an inquiry into the national security implications of uranium imports as a way to shield US producers from global competition.

The Commerce Department has launched an official probe to figure out whether uranium imports pose a threat to US national security. Commerce officials say the probe may lead to tariff or quota recommendations for the president.

Secretary of Commerce Wilbur Ross announced the probe Wednesday, saying the decision was made following a petition filed by two US uranium mining companies.

The secretary noted that domestic uranium production for military and electrical power use has declined from 49% in 1987 to 5% today.

The business news agency said the Section 232 probe would be aimed at shielding the US mining companies from competition from Russian, Canadian and Kazakh companies, but warned that a probe may add to global trade tensions.

According to US Energy Information Administration figures, Canada, Kazakhstan and Australia account for over half of US uranium imports (25%, 24%, and 20%, respectively), with Russia and Uzbekistan accounting for much of the rest (14% and 4%, respectively).

If Commerce does recommend tariffs, the move would be a major blow to the Canadian economy, which is already facing some $3.2 billion in annual losses to its steel and aluminum industries amid the new US restrictions. Canada sold some $853.6 million worth of uranium to its southern neighbor in 2017. Australia received a permanent exemption to the steel and aluminum tariffs, with any blow against uranium sales therefore expected to be less painful. Kazakhstan, which shipped some $1.4 billion in natural and enriched uranium to the US in 2017, would also face a hit if tariffs were recommended.