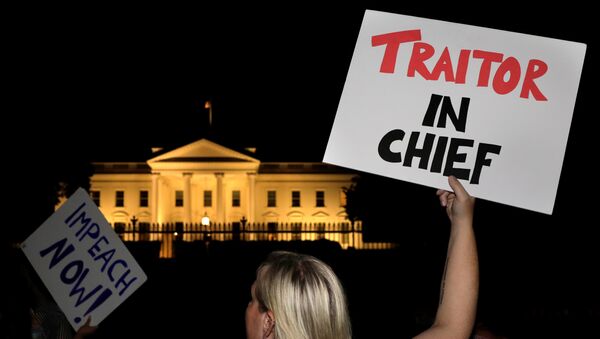 © REUTERS / Yuri Gripas
Subscribe
US President Donald Trump’s Tuesday move to revert back to suggestions that Russia had interfered in the 2016 election is only helping to unite POTUS’ opponents and those who don’t want to see improved US-Russia relations, Peter Kuznick, a professor of history and director of the Nuclear Studies Institute at American University, told Sputnik.

A day after Trump said that Russia had not meddled in the 2016 presidential election at a joint news conference with Russian President Vladimir Putin on Monday, 45 walked back his remarks on Tuesday, saying that he'd misspoken.

"It should have been obvious — I thought it would be obvious — but I would like to clarify, just in case it wasn't. In a key sentence in my remarks, I said the word ‘would' instead of ‘wouldn't,'" Trump told reporters. "The sentence should have been: I don't see any reason why I wouldn't — or why it wouldn't be Russia."

"Unlike previous administrations, my administration has and will continue to move aggressively to repeal any efforts — and repel, we will stop it, we will repel it — any efforts to interfere in our elections. We're doing everything in our power to prevent Russian interference in 2018," he added.

Trump also stressed that he has offered his "full faith and support for America's intelligence agencies."

​Kuznick told Radio Sputnik's Loud & Clear on Tuesday that while he was hopeful for the Helsinki summit, it was ultimately a "disaster" for US-Russian bilateral relations.

"Trump's behavior has been so erratic; some people have dismissed him as a fool, others now accusing him of treason… this is not going to be advancing the cause of improved relations between the United States and Russia, which is absolutely essential right now," the history professor told host Brian Becker. "What this is doing right now is uniting Trump's opponents — and especially those who don't want to see improved relations — giving them more fodder."

"This is ultimately going to be a setback in US-Russia relations," he stressed.

But it isn't all doom and gloom just yet, warned fellow guest Joe Lauria, editor in chief of Consortium News.

"I think it's way too premature to say this was a failure; we have to see what comes out of this in terms of arms control… they supposedly talked about Syria… so we can't tell yet for sure whether this… was a success," Lauria said.
"I think no matter what happened, this was uniting the opposition,' Lauria said, agreeing with Kuznick's point. "The opposition to Trump was united before the summit when the indictments came down on Friday, clearly timed to stop the summit from happening."

On July 13, three days before Trump and Putin were scheduled to have their first one-on-one meeting, US Deputy Attorney General Rod Rosenstein announced that the office of US Special Counsel Robert Mueller would be indicting 12 Russian intelligence officers for their alleged interference in the 2016 presidential election.

"According to the allegations in the indictment, the defendants work for two units of the Main Intelligence Directorate of the Russian General Staff known as the ‘GRU,'" Rosenstein told reporters. Charges in the indictment include creating fake online accounts; conspiring to hack organizations involved in administering the election; and using DC leaks and Guccifer 2.0 to extract and disseminate the information under the direction of GRU.

For Lauria, the US is heading into murky waters. "We don't know the outcome at this point," he said.

Kuznick later chimed in and suggested that even if Trump hadn't "misspoke" at the summit, he would have still been targeted by his opponents.

"There were people out to sabotage this before it occurred," Kuznick told Becker. "You've got the foreign policy establishment… and the neocons… I think Trump fed the worst tendencies and gave them more fodder for their attack on the kinds of things we would like to see happening."

In terms of what might happen in the future, the author of "The Untold History of the United States" said that he's most worried about the US Congress working to sabotage Trump because of the summit.