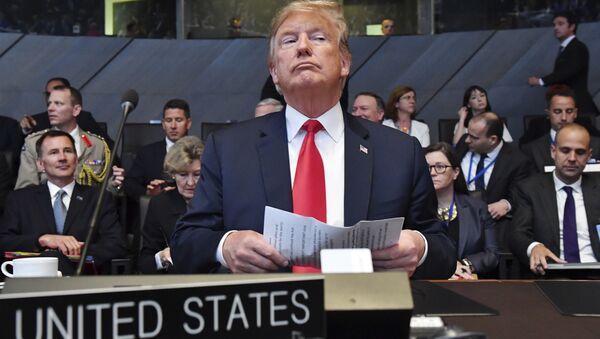 President Trump has come back from last week's NATO summit in Brussels armed with new questions about the possible dangers stemming from the NATO alliance's commitment to mutual defense.

Speaking to Fox News' host Tucker Carlson on Tuesday after returning from his meeting with Russian President Vladimir Putin, Trump was asked the hypothetical question of why American military personnel should go to Montenegro, which joined NATO last year, to defend it if it was attacked.

Criticism Unlikely to Keep Trump From Meeting Putin Again – Ex-US Diplomat
"Now I understand that, but that's the way it was set up," Trump added. "Don't forget I just got here a little more than a year and a half ago. But I took over the conversation three or four days ago and I said 'you have to pay, you have to pay'. And the secretary general [of NATO] said that because of President Trump, last year we had an additional $44 billion, billion with a 'b', raised for NATO. And this year it's going to be much more than that. It was very unfair; they weren't paying, so not only were we paying for most of it, but they weren't even paying, and we're protecting them. Add that to your little equation on Montenegro."

Trump also challenged the conventional wisdom of Russia being America's eternal adversary, a sentiment put forth by politicians on both sides of the aisle in the United States.

"It's sort of incredible, because if you look at World War I and World War II, that was Germany, and in World War II, Russia lost fifty million people and helped us win the war. I was saying to myself the other day 'you know, Russia really helped us.' I'm not pro-Russia, or pro-anybody. I just want to have this country be safe. I don't want nuclear weapons – even people thinking about it. You know Russia and the United States control 90% of the nuclear weapons in the world, and getting along with Russia, and not only for that reason, that's a good thing, not a bad thing," Trump stressed.

Trump Calls Ex-CIA Chief Brennan ‘Bad Person’ After Putin Summit Criticism
Asked if he agreed with the concept of Russia being America's "chief adversary," the president said he didn't. "They're a strong military, but their economy is much smaller as you know than China, and I don't want to even use the word 'adversary'. We can all work together, we can do great. Everybody can do well and we can all live in peace."