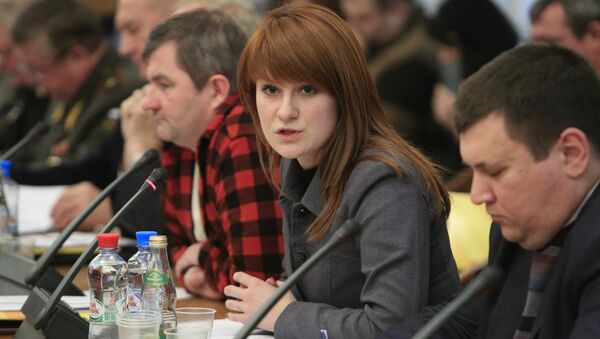 © Facebook / Maria Butina
Subscribe
Mariia Butina, 29, pleaded not guilty in a Washington, DC, court Wednesday to two criminal allegations stating that the recent American University graduate conspired to, and did, act as an agent for the Russian government. She was denied bond and will remain in detention pending her next hearing.

Butina has not committed any illegal criminal offenses, her attorney, Robert Driscoll, said Wednesday following her hearing in a federal court. "We strongly disagree with the court decision that there are no conditions to relieve incarceration for the detained innocent student," the lawyer said after the hearing ended.

Butina is a longtime advocate of gun rights in Russia who developed ties with US citizens who shared an interest in defending those rights, namely the National Rifle Association (NRA).

In affidavits supporting the complaints against her she is accused of offering sex in exchange for a position in an unnamed organization.

A federal grand jury charged Butina with two criminal offenses on Tuesday: conspiring to act as a foreign agent without registering as one with the US Justice Department, and materially acting as such an agent. Driscoll said the allegations were “overblown” in a statement Monday following Butina's indictment.

US prosecutors sought to keep Butina in detention until her trial starts in a memo submitted to the court Wednesday. The government said she posed an “extreme” risk of flight from the US to Russia.

According to prosecutors, Butina’s plan to leave was demonstrated by packed boxes in her place of residence in Washington, DC, and the fact that she had gone to a U-Haul rental service store to inquire about getting a moving truck to transport her belongings. It remains unclear how Butina would flee to Russia in a U-Haul truck (a Washington Post story reports that she was planning to move to South Dakota). Her attorney repeatedly said during the court proceedings that Butina had opportunities to leave the country (not, presumably, by truck) before being arrested on Sunday but did not do so.

"She has no intention to flee," he said after the judge ruled Butina must remain in detention throughout her trial.

"She is not an agent of the Russian government. She is innocent. And most notably, she is a young student seeking to make her way in America," Driscoll said. Butina's next hearing was set for July 24.

On multiple occasions, Butina offered to cooperate with Mueller's team and the FBI. The two groups reportedly were not interested.

"You get the sense that someone grabbed a watch and a calculator to determine when the decision on Mariia Butina's arrest should be adopted to maximally under the outcomes of the summit that took place between the Russian and US presidents," Russian Foreign Ministry spokeswoman Maria Zakharova said during a Wednesday news briefing in Moscow. "It was deliberately timed."

The US is hunting Russian citizens, Russian Ambassador to the US Anatoly Antonov said earlier on Wednesday. "There is nothing new in this case," he commented. "The US intelligence services hunt for Russian citizens not only in the US, but also in other countries."

Butina has long advocated for gun rights in Russia and was endorsed by none other than anti-Putin opposition figure Alexey Navalny. Navalny receives considerable coverage from the Western press hailing him as Russian President Vladimir Putin's primary opponent despite the fact he consistently polls in the single digits. In the US, he is promoted as a liberal reformer, notwithstanding his deeply racist views.

000000
Popular comments
as an agent for the Russian government, or, as mentioned yesterday, one with those who are against the President?
michael
18 July 2018, 23:40 GMT1
000000
Well, if and when Russia decides to allow the Syrians to shoot down American or Israeli aircraft over Eastern Syria, the captured pilots can be used as bargaining chips to arrange a trade for Ms. Butina's freedom.