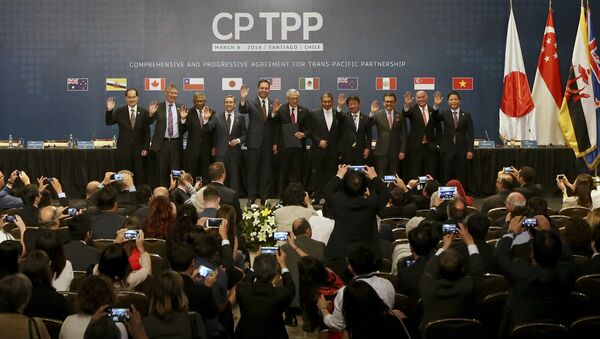 MOSCOW (Sputnik) - Japan seeks to persuade other signatories of the Trans-Pacific Partnership (TPP) trade agreement to increase common efforts in order to bring the accord into force in early 2019, the NHK broadcaster reported on Wednesday.

According to the news outlet, Japan's chief negotiator Kazuyoshi Umemoto called on the other parties to begin the preparations for bringing the agreement into force early next year at the current meeting.

Earlier in the day, a meeting of representatives of the 11 parties to the agreement — Australia, Brunei, Canada, Chile, Japan, Malaysia, Mexico, New Zealand, Peru, Singapore and Vietnam — began in the Japanese town of Hakone, the NHK broadcaster reported.

Trump Says WTO, TPP Not Serving US Interests, Bilateral Deals More Profitable
The TPP trade agreement was signed in 2016 and originally comprised 12 Pacific Rim nations, including the United States. The future of the deal, which was never ratified, has raised questions after the decision of US President Donald Trump to pull out of the agreement in January 2017.

In March, the 11 remaining members of the agreement signed a new pact without the United States in Chile, which made no changes to the country's obligations in terms of providing access to each other's goods and services markets, but considerably amended a chapter devoted to intellectual property.