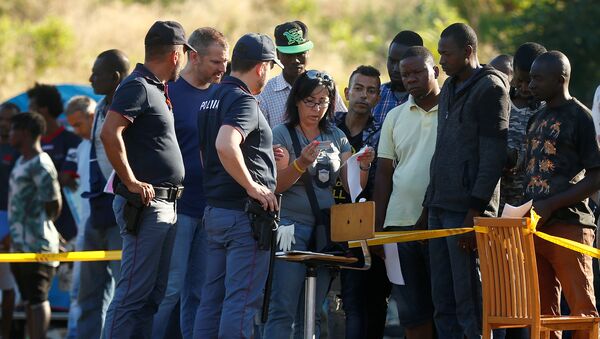 Scores of individuals suspected of collaborating with the mafia were arrested across Italy in mid-June, part of the country's protracted efforts to rein in organized crime.

In the past twelve months, Italian mafia groups have turned illegal migration into one of their main sources of income, according to a report released by Italy's Direzione Investigativa Antimafia (DIA), or the Anti-Mafia Investigation Directorate.

The Italian news network TG24 cited the report as saying that endorsing clandestine migration remains one of the most profitable criminal rackets.

This criminal activity, which is closely linked to prostitution and illegal employment, has become "especially beneficial due to a record of accompanying crimes amid an ever-changing geopolitical scenario," according to the survey.

In this vein, the document specifically pointed out the creation of "alliances" between Italian mafia members and their foreign accomplices when it comes to the transportation of illegal migrants.

"The criminal situation in Italy continues to be characterized by interaction between Italian and foreign [criminal] groups, which takes different forms depending on the territories where efforts are united," the report said.

While in Italy's southern areas foreign criminals mainly get the green light from local mafia organizations, in other regions they seek to obtain their own "operational spaces," which mean close collaboration with the Italian mafia on almost equal terms, according to the survey.

The authors of the report noted that apart from being involved in illegal migration, foreign criminal groups in Italy also continue collaborating with local mafia on drugs and weapons trafficking.

READ MORE: Migration in Italy is 'Certainly Big Issue and it Favors the Right' — Professor

The survey came after Italy presented its European Multilevel Strategy for Migration at an unofficial meeting in Brussels in late June. The preliminary document urged EU members to share the burden of accommodating refugees and migrants, instead of putting the onus on the countries through which new arrivals enter EU territory.

Rome also called for boosting cooperation with countries of origin and transit of migrants and setting up centers there to process asylum demands and provide legal aid.

Italy to Pursue Hardline Migration Policy Despite Standoff With France - Lega
Italy, which serves as an entry point for thousands of migrants and refugees crossing the Mediterranean Sea, additionally proposed creating reception centers in several European countries all at once.

In early June, Interior Minister Matteo Salvini said that Italy could not remain Europe's "refugee camp" while neighboring countries close their borders and defend their frontiers with weapons.

More than 600,000 immigrants have reportedly arrived at Italy's shores from North Africa since 2014.