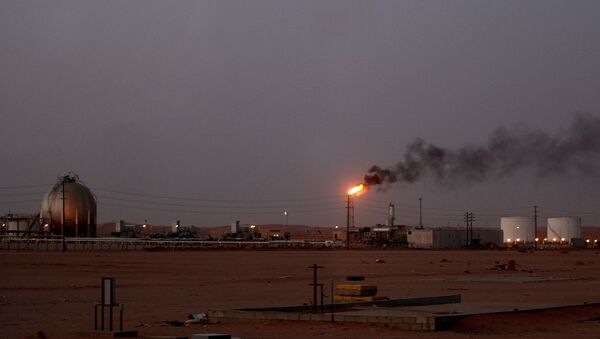 © AFP 2021 / MARWAN NAAMAN
Subscribe
According to representatives of Aramco, there was a fire in the storage of its refinery in the Saudi capital, which, however, has already been extinguished.

The Houthi-run television announced that that the Yemeni Shiite militants had attacked Saudi Aramco refinery in Riyadh using a drone.

While Saudi authorities have yet to comment on the claim, Aramco said its fire control teams and the Saudi civil defence had contained a limited fire that erupted in the early evening in a storage containers at the refinery.

Yemeni Houthi Rebels: Control Over Al Hodeidah Port Not Under UN Competence
Saudi Arabia has repeatedly come under attacks launched by the Houthi rebels who continue to oppose the Saudi-led military intervention in Yemen.

Earlier in July, Saudi forces managed to intercept a Badr-1 ballistic missie launched by Houthi forces at the Saudi city of Jizan.

In June, the Houthi forces launched four missiles at Jizan andanother missile at Riyadh, though Saudi forces reportedly managed to intercept all of them.

Saudi Arabia and a coalition of mostly Gulf states have been involved in a military operation in Yemen since March 2015, striving to restore the government of Abdrabbuh Mansur Hadi who was toppled in a series of uprisings in 2014 and 2015 by the Houthi rebels and fled to Riyadh.

The coalition has suffered a series of setbacks in recent months, with Houthis reportedly launching ballistic missiles and drones into Saudi Arabia and attacking coalition warships.

The war in Yemen has led to thousands of deaths, displaced over three million people, and pushed the country to the verge of famine.