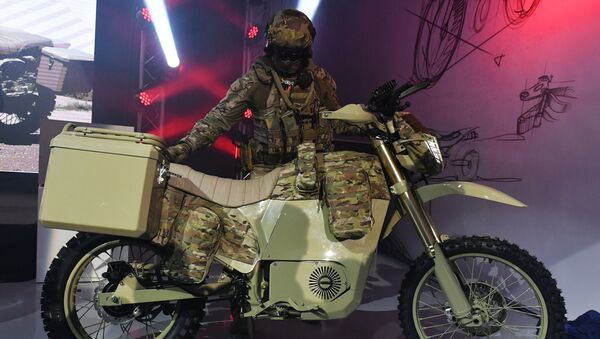 © Sputnik / Mikhail Voskresensky
/
Go to the mediabank
Subscribe
International
India
Africa
Russia’s Kalashnikov Concern has been hitting the headlines in Russia since its proposal to amend the national gun law to allow Russians to own up to 10 weapons per person. With some claiming it is only aimed at enlarging the legendary company's monopoly on the market, Sputnik decided to look into the somewhat unexpected side of its production.

Eco-consciousness and minimalism – these two top trends might not be the first to come to mind when it comes to Kalashnikov…and yet they might as well!

Prior to the 2018 World Cup football festivities, the Russian traffic police were handed brand new Izh Pulsars, which feature zero pollution. The motorcycles boast a rather unique feature: they have a noise level of just 75 decibels, lower than that of football fans at a stadium (or of a vacuum cleaner). The maximum speed is an unpretentious 100 km/h but after all, slow but steady wins the race!

And while the e-bike is no good as a choice for a MotoGP race, riding it is 12 times cheaper than riding a gas-powered bike.

Kalashnikov, Russia’s biggest weapons maker, also produces an electric car, albeit one with only three wheels.

The teeny-tiny egg-shaped Ovum, designed for traffic police, would probably fit The Fifth Element’s New York more than today’s Moscow streets. However, this futuristic electric car seems like a perfect choice for metropolitan traffic as it makes virtually no noise and can reach up to 80 km/h.

Ovum features a modular design, which means that certain parts of the vehicle can be altered for a specific purpose, including the number of passenger seats. We doubt, however, that you would ever want someone riding 'shotgun' to the nearest police department.

Not content to limit its transport options to dry land, the company also introduced a boat, the BK-10M, which was picked up by Russia’s special forces in 2016. What’s so special about it?

The BK-10M is a landing boat with a cruising range of 220 miles, which is able to reach an impressive 40 knots. It is four times as cool as Jerome K. Jerome’s boat as it can seat up to 12 people (including two crew members). Don’t know about the dog, though.

This vessel may come in handy in a huge variety of situations, including offshore operations, troop landing, fire support, counter-piracy and counter-terror missions, as well as marine salvage.

Are cars, boats and bikes too down-to-Earth for your taste? Let us maybe move a little bit higher. A little more… Just a tiny bit more… Here you go. Now we’re some 2,500 meters above the ground. Did you see that seagull-like thing fly past us? It’s called ZALA.

Adorned with a 60x optical zoom and a highly sensitive thermal imaging camera, ZALA is the ultimate stalker; it can see for miles and miles. It boasts a stunning surveillance range of up to 35 km and a communication range of 120km; it also features a new type of battery, which increases the flight time to 5 hours.

ZALA entered serial production this year and is set to go on display at expos in Russia and overseas this summer.

5. Manned Flying Vehicle: The Future Is Just Around The Corner

While putting flying cars into mass production is every automaker's dream, this Kalashnikov concept is definitely ahead of the game.

You might, however, want to search for better wording to describe this odd-looking wheel-less thing which looks more like the love child of a quadcopter and a hoverbike.

The yet-unnamed vehicle is operated by a 16-rotor electric-powered grid-like structure, which is apparently powered by two electric batteries located on each side of the driver. The metal exoskeleton is covered in a shell, hinting at what the full design would look like when the so-called “car” hits the market.

But it’s still unclear whether the vehicle was designed for the military or civilians. Flying traffic cops, maybe? You never know.