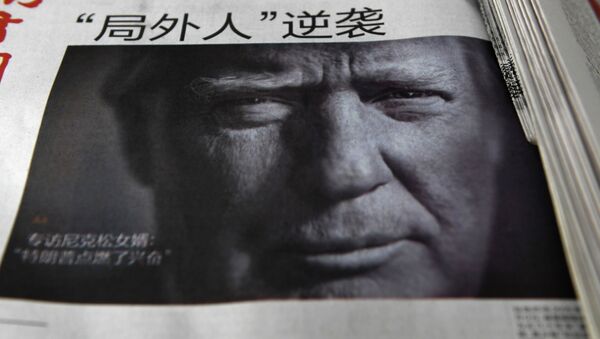 © AFP 2021 / Greg Baker
Subscribe
BEIJING (Sputnik) – China will adopt countermeasures to protect its interests and rights after the US decision to introduce tariffs on steel and aluminum imports, the Chinese Ministry of Commerce said on Wednesday in a statement.

"The Chinese party will have to adopt further measures in line with provisions on the Foreign Trade Law in order to compensate for the damage inflicted by the US activities and protect its legal rights and interests," the statement said.

The ministry pointed out that the countermeasures were needed to protect not only the national interests but also the whole system of the international trade.

"The US measures are inflicting serious damage to the rules of the international trade and undermining the legal rights and interests of the WTO [World Trade Organization] members, including China. In accordance with the WTO rules, the Chinese party asked the United States to hold consultations on compensation for the damage but Washington refused to do so," the statement noted.

The Chinese ministry called on the United States to stop violating the rules of international trade.

US Launches WTO Disputes Against Reciprocal Tariffs From China, EU, Canada
On Monday, Washington submitted a protest to the WTO against Chinese, EU, Canadian, Mexican and Turkish decisions to impose tariffs against the United States in response to Washington's 25 percent tariff on steel imports and a 10 percent tariff on aluminum imports imposed in March.

During his presidential campaign, Trump promised to change the country’s trade policies by resorting to protectionism. After his inauguration, Trump started to fulfill his promises, which, in addition to the tariffs, included withdrawing the United States from the Trans-Pacific Partnership (TPP) and renegotiating the North American Free Trade Agreement (NAFTA).