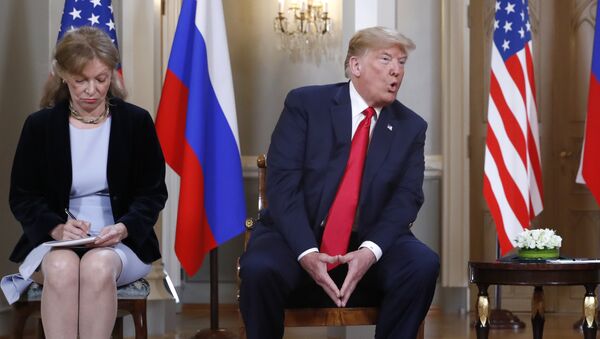 In the US, the judiciary, legislative and executive branches are intended to counteract one another so as to prevent any of them from gaining too much power, a system colloquially referred to as "checks and balances." Now, US legislators are attempting to strip the chief of the executive branch, Trump, of his power to engage in closed-door diplomacy with foreign counterparts.

"This is the president of the United States doing what every president… since [President] Franklin Delano Roosevelt did in 1943 with [Soviet leader Joseph] Stalin, meeting with the head of the head of the Kremlin," New York University professor emeritus Stephen Cohen told Fox News host Tucker Carlson in an interview Monday. "Every president since Eisenhower, a Republican by the way, has met with the leader of the Kremlin for one existential purpose: to avoid war between the two nuclear superpowers," he said.

"I'm calling for a hearing with the US interpreter who was present during President Trump's meeting with Putin to uncover what they discussed privately," tweeted Sen. Jeanne Shaheen (D-NH) Monday. "This interpreter can help determine what [Trump] shared/promised Putin on our behalf."

Rep. Joe Kennedy (D-MA) similarly tweeted on Monday that "[Trump's] translator should come before Congress and testify as to what was said privately immediately," adding that Republicans should "issue the subpoena today."

The translator, Marina Gross, has worked for the US State Department in that capacity for years and has been working for the government as such since at least 2008, when she accompanied First Lady Laura Bush to Sochi, Russia, as her interpreter. In April 2017, Gross was pictured next to former Secretary of State Rex Tillerson in Moscow. She has also translated for White House National Security Adviser John Bolton and current US Ambassador to Russia Jon Huntsman.

There's little known about Gross besides those few gigs. Obama-era US Ambassador to Russia (2012 to 2014) Michael McFaul tweeted Monday that she is "absolutely fantastic!"

Rep. Ted Lieu (D-CA) has also called for Gross to be issued a subpoena on Twitter, and Sen. Richard Blumenthal (D-CT) pushed for one on CNN Wednesday.

On Tuesday, calls for a subpoena against Gross were officialized beyond irate tweets with a letter from Rep. Bill Pascrell (D-NJ) to Rep. Trey Gowdy (R-SC) and Rep. Elijah Cummings (D-MD), chairman and ranking member of the House Oversight Committee, respectively, urging them to request public testimony from Gross in front of the committee regarding "the details of Trump's one-on-one meeting with Putin in Helsinki."

"Serving as a translator, it has been reported that Ms. Marina Gross was the only other American in the room and so the sole reliable witness to the conversation between the two world leaders," the letter said. It added, "We also need to know what was agreed to behind closed doors because Russia is now claiming they are ready to implement agreements between Trump and Putin that were not announced during the joint news conference in Helsinki."

The Resistance has also echoed those sentiments. Prolific tweetstormer on the subject of "active measures" Seth Abramson took to Twitter to declare "SUBPOENA THE INTERPRETER," in a tweet now pinned to the top of his profile. "Russia is announcing agreements made by Trump that Trump won't confirm or deny or explain and that weren't even hinted at beforehand," he posted Wednesday.

"There were sort of three takeaways from the meeting, three proposals that we are currently assessing," State Department spokesperson Heather Nauert said Wednesday. "We will certainly take a look at them."

"She explained that Moscow proposed a high-level working group with business leaders from both countries and an expert council, which would include US and Russian political scientists, current and former diplomats, as well as former military officials," Sputnik News reported.

"Also another proposal was that our NSC [National Security Council] meet with the Russian NSC to discuss follow-up meetings," Nauert said.

Meanwhile, Secretary of Defense James Mattis has signalled openness to talking with this Russian counterpart, albeit privately, Sputnik News reported.