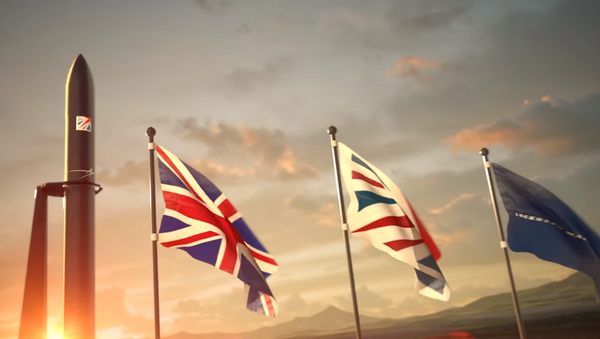 © Screenshot/Space Gov UK
Subscribe
The recent announcement of a spaceport being built in Sutherland, Scotland, has British military officials trying to figure out how they can use the base to send national security payloads into space, it was revealed on Tuesday.

Air Vice-Marshal Simon Rochelle, chief of staff for capability and force development with the Royal Air Force, told Defense News in an article published this week that once the port is built and ready for launches in 2023, it should be used to send "operationally relevant assets into space."

For Rochelle, it's about being able to deploy emergency supplies via a small satellite orbiting Earth.

"It may be beneficial to have a smallsat, a cube or something to be launched over a humanitarian disaster area, and you just happen to have one good to go and you can put it in the right place," Rochelle told the website following a meeting with researchers leading the Sutherland project.

"Then in a time of contested [activities], what you want to have is resilience…. It just might need to be replacing a few as things happen and occur. It's that ability. We think it's important to be responsive," he added.

Although Rochelle indicated that satellites would be restocked with supplies within 72 hours, he stressed that the project was still in the very early stages.

"It's an immature process at the moment, but we know we want [responsive launch], and we know we think it's important, and we haven't got beyond that point in real details," he told the outlet.

When asked if UK allies should consider using the Scotland spaceport once it's operational, the official responded by saying, "Why not?"

"We go and buy airplanes together; we can buy AWACS together; think of federated capability; think of how partners work symbiotically with each other," he said. "The more we can — Five-Eyes and allies — respond effectively, or even offer deterrence, dissuasion, we may actually control that space domain rather than being threatened or outmaneuvered in the space domain."

The UK government announced that it was moving forward with the project on Sunday, coinciding with the beginning of the Farnborough International Airshow. The Sutherland project, to be headed by Lockheed Martin and UK-based Orbex, will establish vertical launch operations and develop a new, innovative rocket.

​"As a nation of innovators and entrepreneurs, we want Britain to be the first place in mainland Europe to launch satellites as part of our Industrial Strategy," Business Secretary Greg Clark said in a statement. "The UK's thriving space industry, research community and aerospace supply chain put the UK in a leading position to develop both vertical and horizontal launch sites."

"This will build on our global reputation for manufacturing small satellites and help the whole country capitalize on the huge potential of the commercial space age," he added.

As Sputnik previously reported, the UK government will allocate some $3.3 million for the construction of the site to developer Highlands and Islands Enterprise. Lockheed Martin and Orbex were awarded two grants by the UK Space Agency that total roughly $30.8 million.