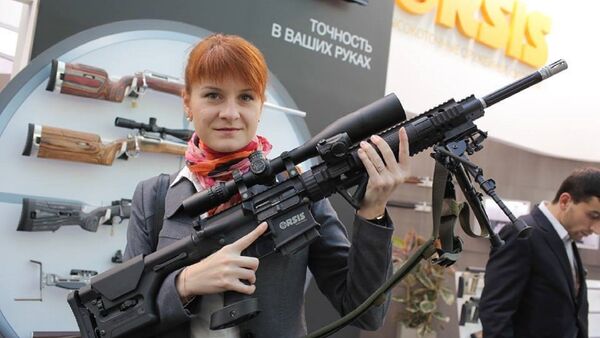 The US Department of Justice has charged 29-year-old Russian national Maria Butina with conspiring to act as an agent of Russia within the US. Butina's attorney slammed the charges, saying she was a student in an American university and in the country on a student visa. Political analyst George Szamuely told Sputnik why the whole case is absurd.

Sputnik: In your view, how justified are the charges against Butina?

George Szamuely: It's becoming quite dangerous these days to be a Russian; it can be almost a crime to be a Russian and to be meeting and dining with important people. You may be hauled in by the Justice Department and be held without bond, incidentally…as if [you're] some kind of a drug lord.

Russian Student Arrested in Washington DC, Charged as Foreign Agent
The underlying charges [against Butina] are quite absurd. She 'failed to register as a foreign agent', and for that she's being held without bond. I think it just shows that it's quite a serious business now to be a Russian in America.

Sputnik: What can you tell us about what is actually known so far about this case?

George Szamuely: [Butina] is quite a well-known figure. She was quite a successful businesswoman in Russia. She was also quite a prominent gun rights advocate in Russia. Then she came to the United States and networked with the National Rifle Association while she was doing her master's degree studies in international relations.

She seems to have met a variety of conservative political figures. She seems to be a very conservative political person in terms of her general ideology. But I don't see any evidence at all that she has particularly senior contacts with any senior political figures in Russia or that she was actually ever really carrying any kind of political influence operation directed from Moscow. I think she was somebody who believed strongly in the ideals of the National Rifle Association; she's obviously a gun rights enthusiast.

Sputnik: It's said that she has some ties to a senior Russian official.

George Szamuely: It's [supposedly] a guy in the Russian Central Bank. But it doesn't seem a terribly senior person; from what I've read he's something like number nine or ten at the Central Bank, not exactly a senior figure; that's about it. It's not as if she's on Vladimir Putin's speed dial.

Sputnik: It's claimed that she was trying to 'cultivate relationships with American politicians to establish backchannel lines of communication seeking to infiltrate US political groups.' Legally speaking, what exactly is the crime that we're talking about?

The whole idea that peddling influence is a crime — if it were a crime, half of Washington would be in prison by now. The whole city is a hotbed of influence operations, and operations by foreigners; I mean just about every foreign government in the world is trying to exercise influence in Washington. If you're to go about cracking down on influence operations, the jails are going to be full tonight. So it's obviously part of this ongoing thing of trying to forge links between the Trump campaign and Russia.

Did House Dem Cohen Just Call for a Military Coup Against Trump?
[Furthermore], none of these meetings took place. It says 'well she tried to organize this meeting', but they didn't take place! The meeting with Trump never took place. But this is all part of the campaign led by the Justice Department.

What is interesting about this is that it is directed at the NRA as well at the Russians. There's really an attempt here to tar the NRA with a 'Russian connection'. Just like the campaign against Donald Trump has been waged in order to tar him with a connection to the Kremlin. The NRA is one of the most powerful and influential bodies in the United States, so if you can somehow discredit it by suggesting that they're 'funneling money from Moscow', that'll do a lot of damage to the reputation of the NRA.

Everything you can read in the indictment is compatible with an ambitious young woman who is trying to network – trying to make a career for herself, evidently within right-wing Republican politics. The question is in why these extraordinary measures are being taken against her, because the offense she's being charged with is absurdly trivial.

World
Trump Says He Might Ask Putin to Extradite 12 Russians Indicted in Russia Probe
Sputnik: What do you think the court is going to say?

George Szamuely: They will probably try to lean on her and see if they can squeeze information out of her (I don't know what kind of information she has)…She's got a lawyer, Robert Driscoll, who's quite a well-known lawyer in Washington. He's been around Republican politics for a number of years; these kind of establishment lawyers I think will try to work something out with the prosecutors, see if they can squeeze as much as possible out of her. Once they realize they can't get that much from her, they'll probably work out some sort of a plea agreement. She'll plead guilty to the charge that she didn't register as a foreign agent, and maybe she'll do a little bit of time, or time served, something like that, and then kicked out of the country.

Dr. George Szamuely is a political analyst and author of the book 'Bombs for Peace: NATO's Humanitarian War on Yugoslavia.' The views expressed by Dr. Szamuely are those of the analyst, and do not necessarily reflect those of Sputnik.