'The Bayonet Went Deep Into the Floor': The Russian Tsar's Family's Last Moments 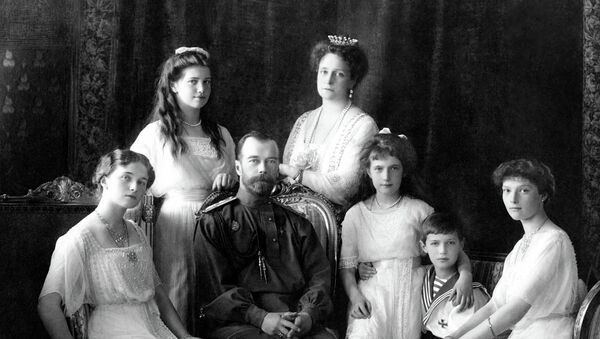 Anton Skripunov
All materials
It’s been 100 years since the last Russian monarch, Nicholas II and his family were shot dead in Ekaterinburg. Some circumstances of the Royal family’s death, as well as what happened to their remains, are still a mystery. Sputnik has gathered what’s known of the tragedy.

Anton Skripunov (Ria.ru) — A stocky man wearing a black leather jacket read out the verdict loud and clearly: “Nikolai Alexandrovich, your associates’ attempts to save you have failed! And now, at a difficult time for the Soviet Republic…our mission is to wipe out the House of Romanov!”

“My God, what does this all mean?”  Nicholas II exclaimed.

In response, the man in the leather jacket took out a revolver.

Shots, screams and moans were heard from the basement of the engineer Ipatiev's house. The executioners were mainly aiming for the Emperor. Later, each member of the firing squad would insist, “It was me who killed the tsar.”  The shooting went on for several minutes, and was so random that even one of the executioners was lightly wounded. 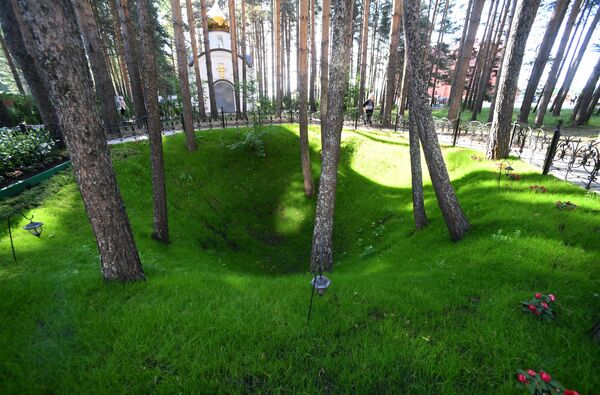 A pit where the bodies of members of Russian emperor's family were left after execution
© Sputnik / Sergei Pyatakov
/
Go to the photo bank
When the sound of gunfire died down, there was a cry in the corner of the room — Anna Demidova, the maid, was alive. There was a shot. The wounded Crown Prince Alexei, age 13, woke up and groaned in pain. There was another shot. In the opposite corner, 21-year-old Grand Duchess Tatiana moved. Like her little sister, 17-year-old Princess Anastasia, she also hadn’t been killed immediately. Peter Ermakov, the right-hand man of chief executioner Yakov Yurovsky, ordered Alexander Strekotin to stab the survivors with his rifle’s bayonet. Then suddenly he snatched the weapon out of Strekotin’s hands and proceeded finishing off the princesses.

“That was the worst moment of their death. They didn’t die immediately, they were shouting, moaning and wriggling. That lady had a very painful death – Ermakov was stabbing her chest so hard the bayonet was going deep into the floor,” Strekotin later recalled. 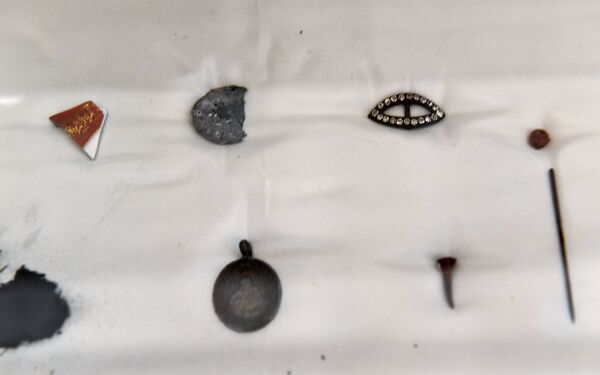 Remains of belongings of the Grand Duchesses found in the fireplace in Yekaterinburg
© Sputnik / Sergei Pyatakov
/
Go to the photo bank
The Emperor's body was wrapped in a blanket and carried out first. The rest of the bodies were carried out on improvised stretchers. The Bolsheviks were in a great hurry: rumors had spread across Yekaterinburg that the White Guard units were about to capture the city.

Eight days later, the White Guards entered Ekaterinburg and opened an investigation. However, it was only in 1979 that the alleged remains of the Romanovs were exhumed. Examinations carried out in the 1990s confirmed that they were genuine, but the Russian Orthodox Church didn’t agree with the results. In 2015, a new trial began. The question of the burial place still remains open.

It’s unknown where the execution order came from – whether it was Ekaterinburg or elsewhere. The Provisional Government arrested the royal family and by July 17, 1918, they had been in custody for more than a year.

From March 22 to August 14, 1917, the arrested were held hostage in the Alexandrovskiy Palace in Tsarskoe Selo.

“You can’t go there, Mr. Colonel!”  the soldiers guarding the Emperor were telling him. The Romanovs couldn’t leave the palace grounds or walk wherever they wanted (there were always gawkers by the palace, and the Romanovs complained they felt as if they were caged); all their letters were censored. Outside the house, the family members were always escorted by six armed soldiers. The new authorities explained all this, citing security requirements.

Empress Alexandra Feodorovna said life's trials were dictated by God. Like her husband, she believed the unrest would soon end, and called upon the Emperor’s supporters not to surrender to despair.

“You can bear anything, if you feel the Lord’s closeness and love, and believe Him. All the hard trials prepare us for another life and a long way,” she wrote on May 28, 1917.

In summer, the situation in Petrograd was nearing a boiling point, so the Romanovs were taken away from the capital.

“The government’s fears for the royal family's welfare triggered that transfer, while a firmer track was taken in governing the country. But at the same time, the government feared that the new course could entail popular unrest, which would be put down with armed power. The government decided to move the royal family to a different, calmer place as they were afraid that struggle could ricochet on us,” Pierre Gilliard, the family's French tutor, who was with the royals almost throughout their exile, recalled. 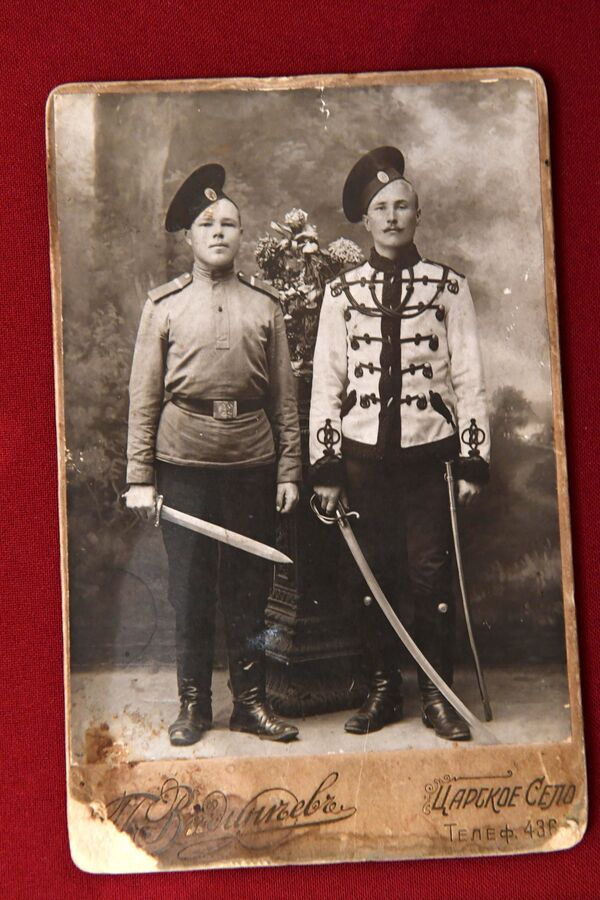 A photograph of members of a convoy that accompanied the royal family from Tsarskoe Selo to Tobolsk in 1917
© Sputnik / Sergei Pyatakov
/
Go to the photo bank
Tobolsk was that “calmer place”. The Romanovs lived in the governor's house. The winter was severe and the children were always ill. The schedule was the same as they had back in Tsarskoye Selo: they woke up at nine, then the children had classes, then they walked or worked in the garden (shoveled away snow or chopped wood). In the evening, Nikolai Alexandrovich read to his family. During weekends, the royals attended church. The family had servants, although by February 1918 they were fewer in number due to lack of funds. There wasn’t enough money to buy food. The local residents and monks helped the Romanovs, although that greatly irritated the men tasked with guarding them.

“In the morning we saw a hill all dug across. It turns out the stupid committee decided on this way to prevent us from going up it and looking over the fence!”  Nikolay Alexandrovich wrote on March 5.

A month later, the All-Russian Central Executive Committee was going to move the family to Moscow. However, plans changed.

It’s unknown why on April 6 the All-Russia Central Executive Committee sent the Romanovs to the Urals rather than to Moscow. And it’s unknown why they chose Ekaterinburg – whether they specially chose a place for the Royals’ execution or they wanted to make it easier to look after them.

The prisoners were transported in secret: first – they transported Nikolai, his wife and daughters Maria and Anastasia as well as some of the servants. The family reunited on May 23rd. In the Urals, the Chekists arrested Prince Ilya Tatishchev, the tsar's adjutant, Alexei Volkov, the Empress’s valet, Anastasia Hendrikova, the lady in waiting, and Ekaterina Schneider, a tutor, all loyal to the monarch. All of them except Volkov would later be shot and murdered by the Bolsheviks.

The conditions in which the family lived became worse by the day. That was especially true when Commandant Yakov Yurovsky of the regional Cheka (a precursor to the KGB) was put in charge of their security on July 4.

“Some workers appeared outside, and installed steel bars on our only open window. There’s no doubt that all the time they are afraid that we will get out or make contact with the guards,” Alexandra Fyodorovna wrote in her diary on July 11.

“Yesterday, Commandant Yurovsky brought a box of all the jewels he had taken and asked me to check them. Then he sealed it, leaving it for storage. The weather became cooler and it’s easier to breathe in the bedroom. Yurovsky and his assistant have started to understand what kind of people surround and guard us, stealing from us, not to mention property – they even had most of the supplies from the nunnery. Now, after the new change, we found out about it, because all the food arrives to the kitchen,” the Emperor wrote two days after Yurovsky’s appointment. Copy of an illustration depicting Russian Emperor Nicholas II's abdication.
© Sputnik
/
Go to the photo bank
It’s still unknown why a few hours before the shooting, the Chekists took the cook Lenya Sednev, whom the Tsarevich liked to play with, away from Ipatiev’s House. The Empress thought that he escaped.

The circumstances of the shooting are known primarily by the materials of the investigation conducted by Nikolai Sokolov on behalf of Kolchak, as well as from the executioners’ memories.

“At eleven in the evening of the 16th, I gathered the people, handed out the revolvers, and announced that we must start killing the prisoners.” I warned Pavel Medvedev about the thorough guard examination of the outside and the inside, and told him that he and the breeder should watch the house and the place where the external guards were located. I also told him to keep in touch with me, and that as soon as everything was ready, he should warn both the guards and the rest of the team that they shouldn’t worry if they heard any noise coming from the house. They should let me know if something particularly bothers them,” Yurovskiy recalled.

At half past one on July 17, a truck pulled up to the Ipatiev’s house. They didn’t turn off the engine. The royal family and servants were awakened, and told to pack their things. It took about forty minutes to complete. They were brought to the basement and ordered to line up.

“There aren’t any chairs in here,” the Empress said. Like everyone else, she didn’t understand why they had been brought there. Yurovsky ordered to bring in three chairs.

The members of the firing squad weren’t identified; their leader is also unknown – it was either Yakov Yurovsky or Peter Ermakov. The text of the verdict read by Yurovsky hasn’t survived.

In a small room, in the dim light, there were people wearing leather jackets with pistols. The innocent victims were in front of them. There were eleven people: Emperor Nikolai Alexandrovich, Empress Alexandra Feodorovna, Grand Duchesses Olga, Tatiana, Maria, Anastasia, Tsarevich Alexei, their doctor Yevgeny Botkin, the cook Ivan Kharitonov, valet Alexei Trupp and the maid Anna Demidova.