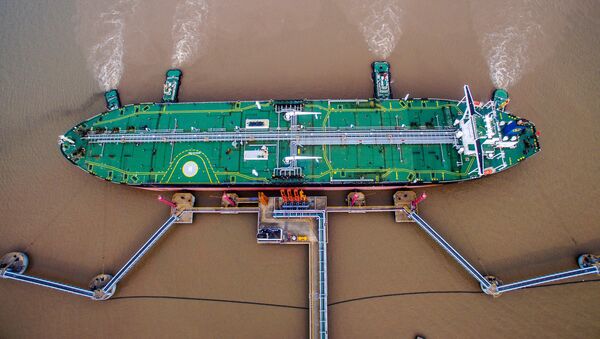 Washington's "comprehensive" package of sanctions against Tehran are expected to kick in this November, but officials say the main target, Iranian crude oil exports, will likely simply be diverted from one group of buyers to another.

A senior US energy official has told The Wall Street Journal that Washington expects China to buy up much of the oil others won't due to the threat of US sanctions. Beijing, according to the official, will likely make the purchases through the same bank it used during the previous rounds of sanctions to get around US penalties.

This includes the Bank of Kunlun Co, Ltd, a bank affiliated with the China National Petroleum Corp with limited exposure to the global financial system. The US has threatened to sanction "everybody, including China" if they purchase Iranian oil once sanctions step into effect.

US Plans to Block Iranian Oil Exports Are Unworkable - Iranian Foreign Ministry
The official's sentiment is a major step back from the bold US policy objective of reducing Iranian oil exports "to zero" following President Trump's withdrawal from the Iranian nuclear deal in May.

An Iranian oil official confirmed to the WSJ that Tehran was in talks with Beijing on diverting its oil sales to China. "We don't have any problem selling our oil [to China], the official said.

The WSJ's report comes amid a growing reluctance by Western companies to buy Iranian oil and a hesitation by banks to finance energy deals in anticipation of US sanctions.

China and the US are in the midst of a trade spat, with President Trump imposing tariffs on some $34 billion of Chinese goods earlier this month, prompting Beijing to retaliate. Beijing is already the largest buyer of Iranian oil and Tehran's largest trading partner and has criticized Washington's withdrawal from the Joint Comprehensive Plan of Action (JCPOA) in May.

World
Iran Ready to Boost Uranium Enrichment if Talks With EU Fail - Official
The National Security Council did not respond to the WSJ regarding this alleged hole in the US's Iran strategy.

This week, Iran filed a lawsuit against the US in the International Court of Justice over the re-imposition of US sanctions, citing violations to the 1955 Treaty on Iranian-US political and economic relations. Also this week, Tehran pledged to secure more of the Indian market for its oil supplies. On Monday, an Iranian Foreign Ministry spokesman said President Trump's aspirations to completely block Iranian oil exports would be impossible to achieve.