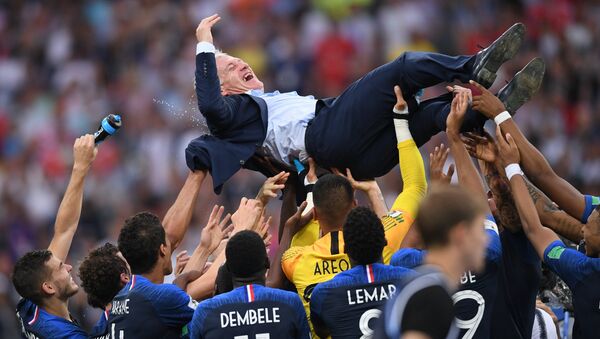 France beat Croatia in the World Cup Final in Moscow, bringing the curtain down on a "festival of football" in Russia which has passed off without incident. Sputnik looks at the problems facing the next host, in 2022, and a growing resistance to the idea of a World Cup ending in December.

On Sunday, July 15, under the watchful eye of FIFA chief executive Gianni Infantino, Russia's President Vladimir Putin handed over the baton of hosting the World Cup to Sheikh Tamim bin Hamad al-Thani, the Emir of Qatar.

But only hours after France's 4-2 victory over Croatia, many people on social media are already trying to get FIFA to change its mind and drop Qatar as the 2022 hosts.

​Many eyebrows were raised in December 2010 when the 22-member FIFA Executive Committee voted for Qatar to be the 2022 hosts, ahead of the United States, Australia, South Korea and Japan.

If Qatar can’t host a World Cup between June and July,

Then Qatar shouldn’t be hosting a World Cup.

​The following year Sepp Blatter was re-elected as President of FIFA but he finally stood down in 2015 as investigators probed alleged corruption within global football's ruling body.

FIFA’s 2022 World Cup in Qatar will take place between November 21st and December 18th. The World Cup has always been a welcomed spectacle during a long football free summer, rather than an interruption of the football season. Darn shame we have to wait 8 years.

Qatar has no football tradition, little or no football infrastructure, a population of less than three million and a climate which is intensely hostile to playing football.

Many people on social media are also upset because FIFA has decided the 2022 World Cup will not take place in the summer, like every other tournament in the competition's history since 1930, because of the unbearable heat in Qatar in June and July.

It will instead begin on November 21, 2022 and end on December 18, meaning massive disruption for the vast majority of the world's football leagues, including the English Premier League, Bundesliga, Serie A and La Liga.

Last month FIFA decided the 2026 World Cup would be co-hosted by the US, Canada and Mexico, which will be a massive contrast to Qatar, a country which has a population of only 2.7 million and measures only 4,471 square miles.

But the Qataris — who are engaged in a regional feud with Saudi Arabia and the United Arab Emirates because of their links with Iran — insist they will make a success of the World Cup in four years' time.

We need the World Cup during the football season break. If Qatar can't host the World Cup between June and July then scrap it off and give the hosting rights to someone else. ffs!

​"Everybody said the Russia World Cup wouldn't be great. The Russia World Cup came along and it blew people's minds. By the same token, we're confident of what 2022 is going to show — and it will be a fantastic World Cup. We'll build upon Russia's success," said Hassan al Thawadi, the chief executive of Qatar 2022's supreme committee.

​Speaking before heading off to the summit with US President Donald Trump in Helsinki, President Putin also expressed his confidence in Qatar's ability to stage the world's premier football tournament.

​"We are proud of what we've managed to achieve for fans of this wonderful sport….I am sure our friends from Qatar will manage to stage the 2022 FIFA World Cup just as exceptionally. It goes without saying that we are ready to share the experience we've built up hosting the World Cup with our Qatari friends," said President Putin.

​FIFA has insisted the 2022 Winter World Cup will be a one-off and the tournament will return to the summer in 2026 and in 2030, when one of the consortiums bidding to host it is Uruguay, Argentina and Paraguay — 100 years after Uruguay hosted the very first World Cup.

​The reality is that if FIFA were to change its mind and seek to pull out of Qatar, it would open itself up to a multi-billion lawsuit from the authorities in Doha.

FIFA knew the World Cup can't physically be played during summer in Qatar yet they still chose to hold it there and then go through trouble of moving it to winter which will disrupt the whole rhyth of club football. FIFA is so shamelessly corrupt, it STILL baffles me.