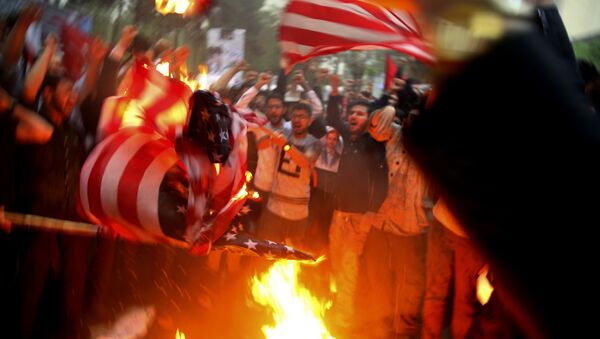 The United States is ramping up pressure on Europe and other countries to wind down economic ties with Iran over Tehran’s alleged support for terrorism.

"We've said very specifically, there's no blanket waivers, there's no grandfathering," Mnuchin told reporters, "We want to be very careful in the wind-down around the energy markets to make sure that people have the time."

In a letter to European nations, US Secretary of State Mike Pompeo and Treasury Secretary Steven Mnuchin rejected the appeal, NBC News reported, citing US and European officials.

"We will seek to provide unprecedented financial pressure on the Iranian regime," the letter said.

The letter also said that Washington would ramp up economic pressure on Iran until there was a "tangible, demonstrable and sustained shift in the policies we have enumerated."

"We want people to reduce oil purchases to zero, but in certain cases if people can't do that overnight, we'll consider exceptions," Mnuchin told reporters on July 13, clarifying some US officials' comments that there would be no exemptions.

EU Firms Ask US to Let Them Trade With Iran, Told 'No' – French Fin. Minister
In June, Germany, France, Britain and the European Union asked Washington to exempt European companies from the sanctions that the US has threatened to impose for doing business with Tehran.

The rejection of the European request comes despite signals from US Secretary of State Mike Pompeo, who has hinted that the US might consider granting waivers to some countries.

"There will be a handful of countries that come to the United States and ask for relief… We’ll consider it," Pompeo told Sky News Arabia during his visit last week to Abu Dhabi.

EU countries have been working hard to protect their companies operating in Iran since President Trump’s decision to walk out of the 2015 nuclear agreement with Iran.

READ MORE: US to Use EU Stance on Iran Deal to Pressure NATO Over Defense Spending — Prof

Brussels is working on a set of measures to circumvent US sanctions, including direct money transfers to Iran’s central bank. The step would bypass the US financial system and allow European companies to repay Iran for oil exports and repatriate Iranian funds in Europe to avoid US penalties.

EU leaders have also decided to activate the so-called blocking statute, which bans European companies from complying with the US sanctions against Iran.