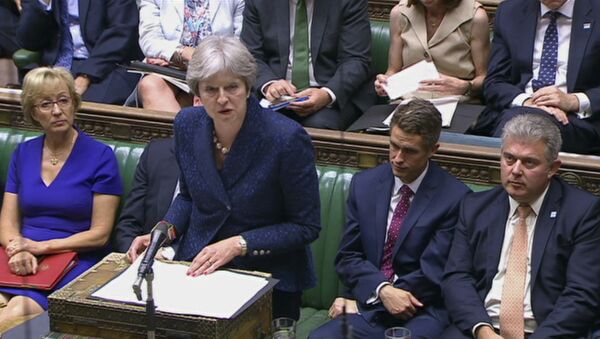 Opposition to the Prime Minister’s plan centres around plans to create a UK-EU Customs Area and continued British adherence to European industry rules and standards.

Up to one hundred Conservative MPs have reportedly joined a WhatsApp group seeking to coordinate opposition in the party against Prime Minister Theresa May's blueprint for Britain's exit from the European Union agreed at Chequers a week ago.

The group of MPs, principally comprised of so-called "Hard Brexiteers," are reportedly planning to vote on amendments to the plan put forward by the "European Research Group," which is linked to the conservative right wing of the party.

Canvassing grassroots opinion for the @GavinBarwell @BrandonLewis is going well: the South West Conservatives WhatsApp group now has a 'no political discussion' rule in place after canvassing local officers' views on Chequers and the PM produced such a negative response!

Can i join the whats app group please? I too would love to be involved in a plot to bring down @theresa_may and the @Conservatives https://t.co/rQdCQVhRz7

Heeey, the Conservatives have their own WhatsApp group! This is the same line Rees Mogg is running with! https://t.co/pVPQIliGFE

At least nine members of Theresa May's government have resigned over her Brexit blueprint including former Foreign Secretary Boris Johnson and Brexit Secretary David Davis. Opposition is principally linked to the Prime Minister's willingness to continue adhering to European industry rules and regulations after Brexit despite having no say in formulating them.

The concession on so-called "regulatory alignment" with the EU was attempt by May to solve the most intractable element of the negotiations with Brussels, namely the Northern Irish border.

Leading Conservative supporters of a "hard Brexit" such as MP Jacob Rees-Mogg have become increasingly vocal in their criticisms of Mrs May's handling of the Brexit process, describing the Chequers plan as "hopeless" and that it crossed red lines that could threaten her leadership.