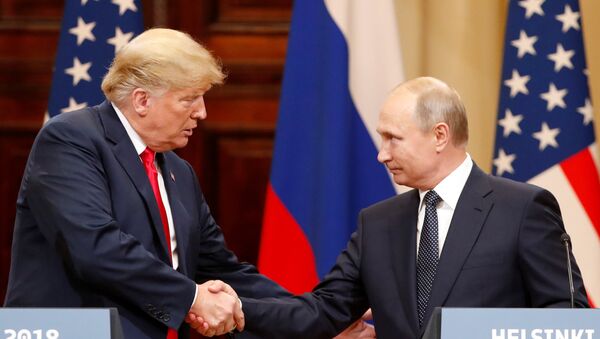 US President Donald Trump said in an interview with Fox News on Monday that Russian President Vladimir Putin told him during the summit in Helsinki that he wants to be of great help in resolving the situation with respect to North Korea.

"To me the most important issue is the nuclear issue… If you look at Russia and the United States, that’s 90 percent of the nuclear weapons. We’re doing something and working on other countries. He [Putin] also said he wants to be very helpful on North Korea," Trump said in an interview with Fox News on Monday.

"To me, the most important issue is the nuclear issue."

President @realDonaldTrump sits down with @seanhannity for his first interview following his meeting with Russian President Putin. Tune in tonight at 9p ET on Fox News Channel. https://t.co/CXfv7TtOdd pic.twitter.com/7Czrk17irb

North Korea Confirms Commitment to Denuclearization - Pompeo
Russian President Vladimir Putin and his US counterpart Donald Trump held on Monday their first ever full-fledged summit in the Finnish capital of Helsinki, which received the positive assessments both from the two leaders and the representatives of the international political community.

The Russian-US talks, which lasted for nearly four hours, were assessed by Putin as "very successful and useful," while Russian Foreign Minister Sergey Lavrov went even further in his evaluations, saying that the negotiations were "better than super" and "excellent."

Donald Trump, in turn, stated that the dialogue with Russian President was very productive and it had changed for the better the Russian-US relations, which, according to him, had recently been worse than ever. The US president also expressed his hope that the Russian-US constructive dialogue would open new opportunities for peace and stability in the world.