Fitch Economist Blows Lid off US' Dependence on Russian Oil 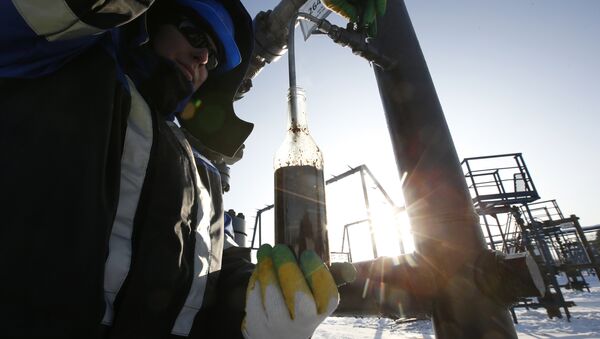 Russia doesn’t view the US as a potential key purchaser of the its oil, while Washington has expressed a keen interest in putting a damper on exorbitant oil prices by pushing OPEC to boost its output, which seems especially relevant ahead of the US midterm elections.

The US purchases approximately 8 billion dollars’ worth of Russian oil, which is about 3 percent of  Russia’s total production, Dmitry Marinichenko, head of natural resources and raw materials group at the rating agency Fitch, told Sputnik.

“As of today, the US buys roughly 300,000 barrels of oil from Russia daily, while the amount drastically varies from month to month,” he said, noting that it is currently just “a drop in the bucket,” meeting just about 2-3 percent of US’ need for oil imports and accounting for less than 3 percent of Russia’s overall oil production,” said Marinichenko.

According to the economist, the American market can’t be billed as a priority for Russia, whereas the major destination of Russian oil flow has recently become China.

“So, it’s hardly possible to speak about any new trends with this regard,” he remarked.

On July 16, it emerged that the US is floating the possibility of a dip into its emergency oil reserves if the prospective global oil output is not sufficient to propel prices down, with the suggestion coming in the run-up to the US midterm elections slated for November 6.

Late last month, OPEC and its partners, led by Russia, agreed to ramp up oil production by about one million barrels per day, or one percent of global supply, with the US exerting pressure on them in a bid to put an end to the high oil prices. OPEC’s plan, however, comes amid speculation about the future of the oil market at large, with Iran being squeezed away from it by the US.  In June, Washington threatened to slap penalties on countries that fail to curb oil trade with Iran by November 4.