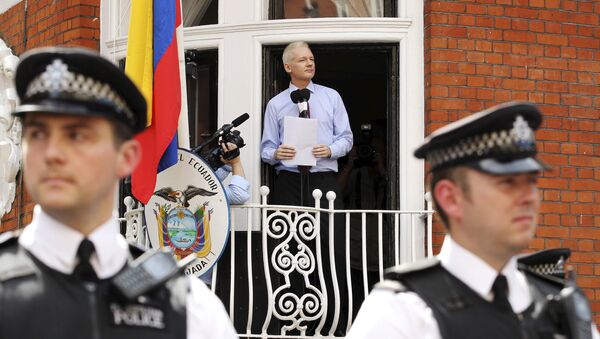 © REUTERS / Olivia Harris/Files
Subscribe
For over two months now media have been speculating that Ecuador is preparing to strip WikiLeaks founder Julian Assange of his political asylum and hand him over to British and US authorities after Ecuadorian Foreign Minister Maria Fernanda Espinosa said that her government and the UK had “the intention and the interest that this be solved.”

According to The Times, the United Kingdom and Ecuador are engaged in secret talks to banish Julian Assange from the South American state’s embassy in London, where he has been living since 2012 for fear of being extradited to the US where he would face espionage charges.

WATCH LIVE: People Rally in London in Support of Wikileaks Founder Assange
The reported high-level negotiations came weeks before Ecuadorian President Lenin Moreno’s visit to the UK. The head of the state previously described Assange, who was granted asylum under Moreno’s predecessor Rafael Correa, as a “hacker,” an “inherited problem” and a “stone in the shoe,” The Sunday Times reported.

Unnamed sources, ostensibly close to Assange, are said to believe that he cannot be deprived of political asylum, and that he’s not aware of the top-level talks.

In late June, US Vice President Mike Pence “raised the issue” of Assange in a conversation with Moreno during his trip to Ecuador. Following the meeting, Ecuadorian Foreign Minister Jose Valencia stated that it was not up to Washington to decide the fate of the Australian.

“Ecuador and the United Kingdom, and of course Mr. Assange as a person who is currently staying on asylum at our embassy. Does not therefore appear, on an agenda with the United States,” Valencia said.

“Ecuador has been looking for a solution to this problem. The refuge is not forever, you cannot expect it to last for years without us reviewing this situation, including because this violates the rights of the refugee.”

WikiLeaks’ Assange Forced to Choose Between Asylum and Health - Lawyer
In March, Assange was cut off from the outside world by the government of Ecuador; he was also banned from receiving any visitors, which is believed to be due to a series of his tweets on the Catalan independence movement in Spain.

Assange cannot leave the South American state’s embassy in London without being arrested and extradited to the United States, where he has been accused of espionage and leaking thousands of classified documents related to military operations.

According to The Guardian report, Ecuador spent some $5 million on a top-secret intelligence operation, dubbed Operation Guest, to employ international security and undercover agents to monitor the whistleblower’s visitors.  The op was allegedly approved by ex-president Rafael Correa and former foreign minister Ricardo Patino.