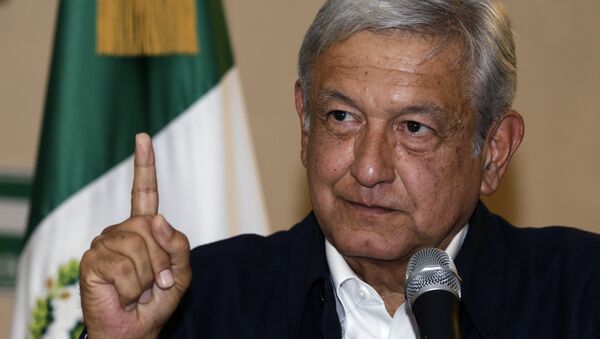 MOSCOW (Sputnik) - The United States has been trying to "get into the head" of Mexico’s president-elect Andres Manuel Lopez Obrador for years prior to his election this July, secret cables published by WikiLeaks have showed.

The two-cable series has revealed confidential exchanges between Washington and US outposts in Mexico since 2006, bearing testimony to attempts by the previous administration to profile the nation’s leftist leaders and parties.

A 2009 memo written in the name of then State Secretary Hillary Clinton inquired about ties between Lopez Obrador, also known as AMLO, and his political allies, and the extent to which they were likely to work together in the run-up to 2010 and 2012 elections.

An August 2006 cable by the Mexico City bureau to the State and other departments explored the possibility of AMLO becoming Mexico’s "shadow president" in the wake of his defeat by a paper-thin margin in the July presidential vote, an outcome he refused to accept.

Mexican President-Elect Obrador Pledges ‘Understanding’ With Trump
The report pointed to AMLO’s "rigid, self-righteous way of thinking, which excluded the possibility of compromise, and his tremendous charisma, which guaranteed that he would never lack for a core of dedicated followers."

The analysis also cited AMLO's biographer Alejandra Lajous, in a chapter titled "Getting into AMLO's Head," who said that the politician was "extremely manipulative and willing to betray longtime allies and supporters in order to advance ‘his cause’."

The unflattering report was released ahead of this Friday’s visit by State Secretary Mike Pompeo and a delegation of high-profile officials to Mexico to meet with sitting President Enrique Pena Nieto, as well as with Lopez Obrador, who will be sworn in on December 1.