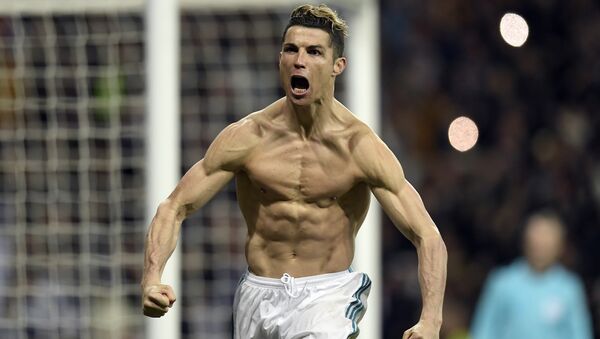 © AFP 2021 / OSCAR DEL POZO
Subscribe
Juventus confidently grabbed the spotlight on Wednesday as it completed the transfer of Cristiano Ronaldo from Real Madrid for a Serie A record of roughly $116 million, as the five-time Ballon d’Or winner signed a deal to play for the next four years for the iconic Italian team.

Whereas many eagerly indulged in Ronaldo-mania in the Italian city of Turin, home to Juve, others couldn’t help picking up on the mammoth sum that the Agnelli family, who essentially control both the Turin-based Fiat factory and the city’s FC Juventus, is now obliged to pay for the transfer as well as in wages to the Portuguese forward.

To protest the staggering wage disparity, a group of former Fiat Chrysler factory workers and union activists hung banners against the holding company’s move on a wall outside a car factory in Naples, with strikes planned across Italy from Sunday till Tuesday, according to Italian media. For instance, the USB union has announced a 44-hour walkout at the car company’s plant in Melfi, a city about 100 miles east of Naples, starting July 15.

"It is unacceptable that while the [owners] ask workers of FCA… for huge economic sacrifices for years, the same decide to spend hundreds of millions of euros for the purchase of a player," the union said in a statement, adding that “the owners should invest in car models” that serve the needs of thousands of people “rather than enriching only one.”

Separately, thousands of Fiat Chrysler employees have become affected by a state-sponsored temporary layoff project, as it is commonly referred to, which started years ago and is expected to run till 2022, which is when Ronaldo’s contract is due to expire. According to the BBC, however, the protest is likely to have a limited impact, as the plant in Melfi is one of a total of seven facilities run by the holding company across the country, with the USB representing the interests of a small number of workers.

Nevertheless, the marketing impact of the sensational transfer deal is hardly deniable, with football finance expert Rob Wilson, of Sheffield Hallam University, saying that Juventus is likely to earn more than enough with Ronaldo on the team to cover the transfer fee and the star’s wages.

"The marketing leverage that Juventus will be able to create will be significant. Added to that the likelihood that he will strengthen the team, it seems plausible that they will be more successful domestically and qualify routinely for the Champions League. That means more sponsors, more TV money and more prize money," the BBC cited Wilson as saying. 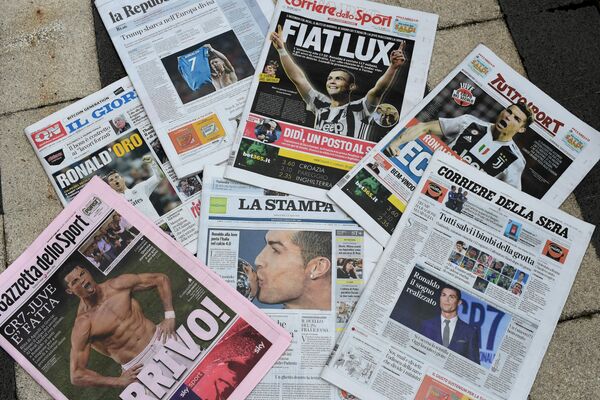 Meanwhile, local entrepreneurs seem to have taken up the idea and are seriously poised to cash in on the iconic footballer’s transfer to Turin. One of the best examples, perhaps, is Leonardo La Porta, long-standing owner of Gelateria Miretti in downtown Turin. Despite being no football fan and no Juventus supporter either, he has now created an ice-cream flavor called CR7, in Ronaldo’s honor, which is the second flavor he has ever dedicated to a person; the first one celebrated the Pope’s visit to the northern Italian city back in 2015. 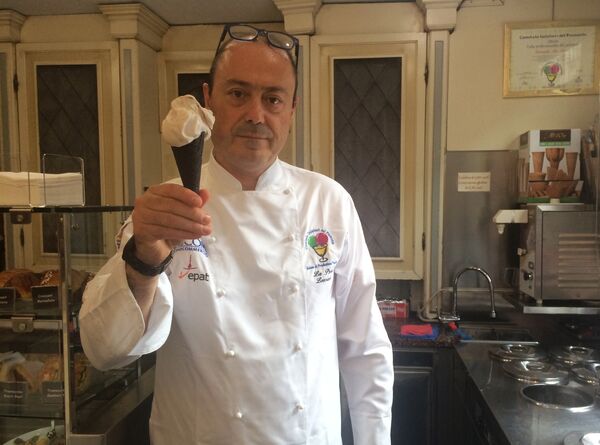 A similar business idea came to the owner of Tommy Tegamino pizzeria, owned by two Juventus enthusiasts, brothers Filippo and Tommaso Crozaso. Their eatery boasts a new item on the menu — that is “Pizza CR7,” topped with stracchino cheese and black olives in the shape of the number “7,” with the monochromic pattern standing for the black and white colors of Juventus.

"We all hope he’ll come!" Sara Giulia Peira, the 35-year-old manager of the oldest of the three branches of Tommy Tegamino, was cited by Fox Sports as saying. "Maybe if he finds out he’ll come here to try it, it’ll be great."

This is to say nothing of sales of shirts featuring Ronaldo’s name and number on the field. Souvenir items haven been selling like hot cakes, not solely in Turin, Fox Sports wrote. One shop a stone’s throw away from the stadium reportedly ran out of the shirts on Wednesday night as the city started preparing to welcome the player, due to be formally presented on Monday. 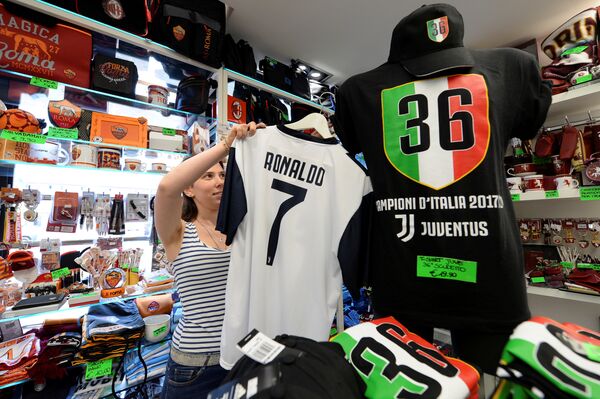 A woman adjusts a Juventus jersey with the name of Cristiano Ronaldo at a souvenir shop in Turin, Italy July 11, 2018
© REUTERS / Massimo Pinca

It was confirmed earlier this week that Portuguese football star Cristiano Ronaldo is leaving Real Madrid for Juventus just before the start of the next season, with the acquisition reported to cost Juventus £88 million (over $116 million at the current exchange rate).