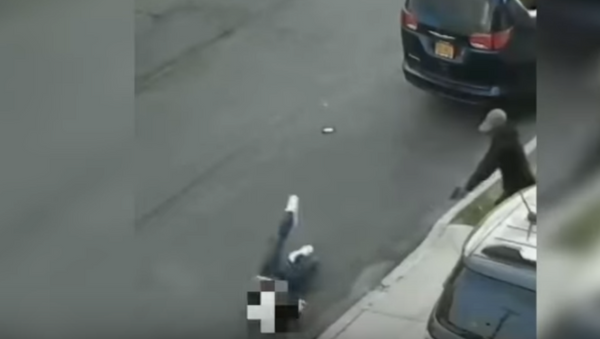 On Thursday, the New York Police Department (NYPD) released dramatic video footage of a reputed mobster from the Bronx, a borough of New York City, surviving a point-blank attack by a masked gunman.

The surveillance tapes shows the unidentified hit men in a dark sedan with New Jersey plates Thursday morning before the shooter, who was in the passenger seat, exits the car and fires several shots at 41-year-old Salvatore Zottola, a Bonnano crime family associate.

In the video, Zottola can be seen rolling on the pavement behind a minivan, ducking for cover in an attempt to avoid the bullets, as the shooter unloads opens multiple rounds from point blank range.

After running out of the bullets, the shooter runs back into the getaway car, which then speeds off.

According to reports, Zottola was rushed to Jacobi Medical Center with gunshot wounds to the chest and right hand. He also suffered a graze wound to his skull. However, he is currently in stable condition. Authorities are currently searching for the hitmen involved in the incident.

"We want to thank everyone for their kind words, but you can go f**k yourself," an unidentified Zottola family member said outside the Jacobi Medical Center Thursday, the New York Daily Post reported.

It is unclear whether the Thursday shooting is related to an incident involving Zottola's father, Sylvester, on June 12, in which Sylvester shot a man after he pulled a gun on him outside his Bronx home. Sylvester, who did not have a permit for the gun, was arrested by authorities for weapons possession and reckless endangerment.