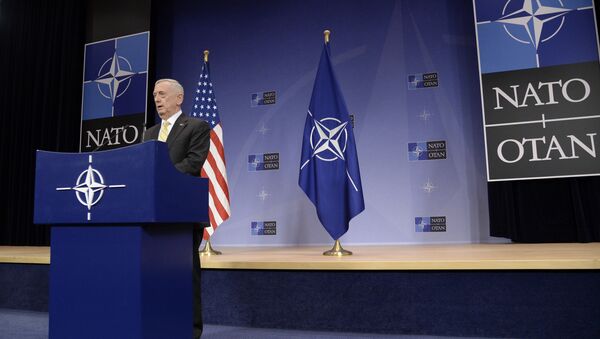 "I just heard about this story that the Pentagon is in damage control," Mattis told reporters on Friday. "That was fascinating. I love reading fiction."

"It was stimulating to read. I've found out while I've been with you with full transparency on the airplane, you watching what's going on; that I've been in damage control," he continued. Mattis spoke with reporters during his flight from Croatia to Norway.

The 67-year-old Washington State native went on to joke that "it must have been the most pleasant damage control in the A-5 I ever could have imagined with the level of unity, of purpose we experienced there."

"So anyway, people are entitled to their own opinion, even if it's not fact-based," he said.

Mattis' comments came after NBC News published an article on Thursday that stated Pentagon officials went in "full-scale ‘damage control'" after Trump left the NATO headquarters in Belgium.
The publication goes on to explain that the directive was meant to "reassure… that America will abide by its defense commitments in the region."

Throughout his time in Belgium for the NATO summit, POTUS repeatedly criticized the organization and urged member countries to increase their defense spending contributions to 2 percent, with the ultimate goal of 4 percent.

"Many countries are not paying what they should," Trump told reporters present at a breakfast meeting with NATO Secretary Jens Stoltenberg. "And, frankly, many countries owe us a tremendous amount of money for many years back, where they're delinquent, as far as I'm concerned, because the United States has had to pay for them."

"So if you go back 10 or 20 years, you'll just add it all up. It's massive amounts of money is owed. The United States has paid and stepped up like nobody," he added.

According to the Department of Defense, Mattis had departed from Croatia after meeting with Croatian President Kolinda Grabar-Kitarović to discuss the country's NATO defense spending commitments.

000000
Popular comments
God i hope to live to see the day these NATO terrorist scumget what's coming to them.

Dungeon Ambassador from Terra
14 July 2018, 22:28 GMT2
000000
Sir : you have voiced your fears openly, as your peers before you.. These indiscretions are noted.. the failure of your geographically positioned brethren to follow suit is somewhat obvious... the only course WE see is too further your tapestry to those eastern bloc fellows that " how can one say politely" BAAAAAAAA like the proverbial ewe<>you " pun INTENDED Sir"