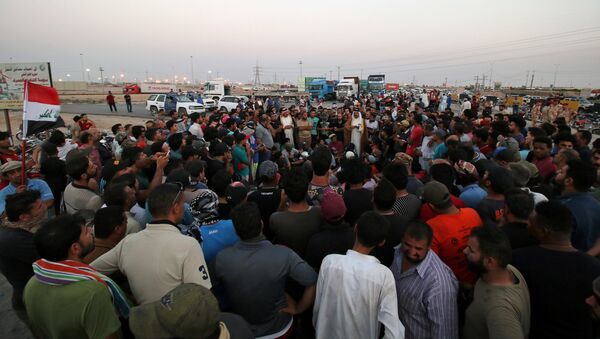 CAIRO (Sputnik) - At least one protester was killed and dozens of others were injured in clashes with police during anti-government demonstrations in the southern Iraqi Governorate of Maysan, local media reported on Friday.

Dozens of police officers were injured in clashes with protesters as well, according to the broadcaster Alsumaria.

Protest actions began in southern Iraq about a week ago in the port city of Basra. The situation worsened after the death of a demonstrator last Sunday protesting against unemployment and deterioration of the situation in the communal sector.

Iraqis ‘Tired of Conflict’, Won’t Be Led to Civil War by Ballot Warehouse Arson
The protesters are demanding that the authorities put an end to electricity and water supply disruptions. Protests are now spreading to other provinces in the south of the country.

According to the broadcaster, earlier on Friday, protesters broke into the international airport in the Iraqi city of Najaf and also seized a provincial administration building. Iraq's state television reported later, however, that the protestors had withdrawn from the airport and air traffic had resumed.