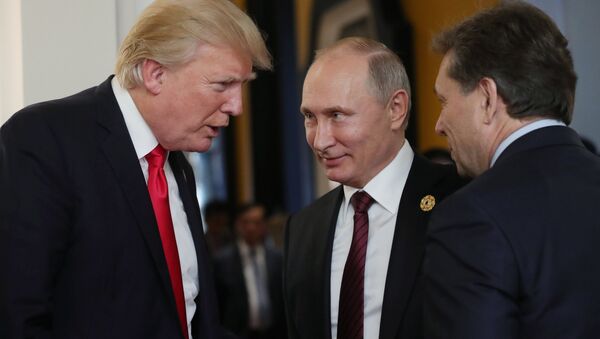 With Russian President Vladimir Putin and US President Donald Trump just days away from meeting in Helsinki, Finland, the US Department of Justice’s decision to announce its indictment of 12 Russian alleged military intelligence officers seems sketchy, Jim Kavanagh, the editor of thepolemicist.net, told Radio Sputnik Friday.

US Deputy Attorney General Rod Rosenstein revealed the indictment on Friday, which accused a 12 people of interfering in the 2016 US presidential election. The Russian Foreign Ministry said on Friday, however, that there is no evidence the individuals are linked to Russian military intelligence.

"The indictment charges 12 Russian military officers by name," Rosenstein told reporters. "According to the allegations in the indictment, the defendants work for two units of the Main Intelligence Directorate of the Russian General Staff, known as the GRU."

According to the indictment, hackers conspired to target Hillary Clinton's campaign, the Democratic National Committee and the Democratic Congressional Campaign Committee with the intention to release stolen information via DCLeaks and Guccifer 2.0 to disrupt the 2016 US presidential campaign.

​Kavanagh told Radio Sputnik's Loud & Clear on Friday that Rosenstein's timing, though not a surprise, was a bit of an eyebrow-raiser.

"We see this every time: a couple days before some meeting that's going to lessen tensions with Russia, something comes out," the editor told hosts John Kiriakou and Walter Smolarek. "Now this is clearly [special counsel Robert] Mueller's shot against the Russians… this is the meat of the matter so far as Russian hacking is concerned."

"But it's extremely suspicious that… a couple of days before the meeting of Trump and Putin, this comes out," he said. The two presidents are expected to meet on Monday.

Kavanaugh noted several other instances in which the timing of international incidents seemed to curiously accompany changes in US policy. "The day after Trump announced he wanted to pull troops out of Syria, there's a gas attack, a fake gas attack on Douma and [then] the Skripals show up at another time. So this is something that we have to be skeptical about… even though there's no particular evidence in it, there's a lot of assertions that are specific and we'll have to see how it plays out," he stressed.

When asked about the charges placed against the Russian nationals, Kavanagh went on to speculate that the chances of them voluntarily visiting the US to stand trial were slim.

"It's going to be fought out where it's fought out now: on Twitter, in the news, in the media."

The Mueller investigation into the alleged Russian interference in the 2016 US presidential election and alleged collusion between the Trump campaign and Russia has led to the indictment of some 32 people and three companies. The majority of charges brought by investigators have had more to do with financial crimes and coverups that took place prior to the election than the actual election itself.