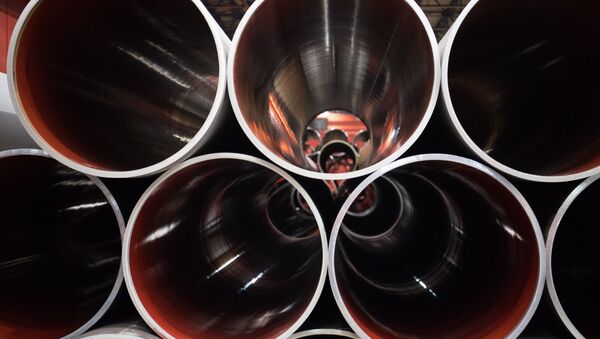 © Sputnik / Sergey Guneev
/
Go to the mediabank
Subscribe
International
India
Africa
WASHINGTON (Sputnik) - US Secretary of State Mike Pompeo and EU foreign policy chief Federica Mogherini on the sidelines of the NATO summit in Brussels discussed mutual concerns about the Nord Stream 2 project and the need to push reforms in Ukraine, State Department Spokesperson Heather Nauert said in a press release on Thursday.

"The two leaders… discussed shared US and EU concerns about the Nord Stream II pipeline and the need to ensure the diversification of European energy supplies," Nauert said. "They discussed the security and humanitarian situation in Syria, the importance of continued reform in Ukraine, and the common approach to ensuring a path to the final, fully verified denuclearization of the DPRK [North Korea]."

Why Europe Will Ignore Trump's Wrath Over Nord Stream 2
Earlier on Thursday, US Energy Secretary Rick Perry said that the United States does not support Nord Stream 2, but sees imposing sanctions on EU companies linked to the gas pipeline project as "the last place to land."

On Wednesday, the US Department of State said that any firms working in the Russian energy export pipeline sector face sanctions risk.

European Commission's Vice-President for Energy Union Maros Sefcovic said during his joint press briefing with Perry after the EU-US Energy Council's meeting in Brussels that he agreed with the US energy secretary on the issue of sanctions.

The United States, which is seeking to promote its own gas companies on the European market, has repeatedly criticized the European Union's reliance on Russian gas and threatened to impose sanctions on companies working under the Nord Stream 2 project.

In the most recent case earlier this week, US President Donald Trump said Germany’s cooperation with Russia and heavy reliance on Russian energy resources was inappropriate and called the country a "captive" of Russia. German Chancellor Angela Merkel said Berlin acted independently in its policies.

Kremlin spokesman Dmitry Peskov has said any sanctions against the companies involved in the Nord Stream 2 pipeline project will be illegal, as the project is based solely on commercial benefits and is not politically motivated.