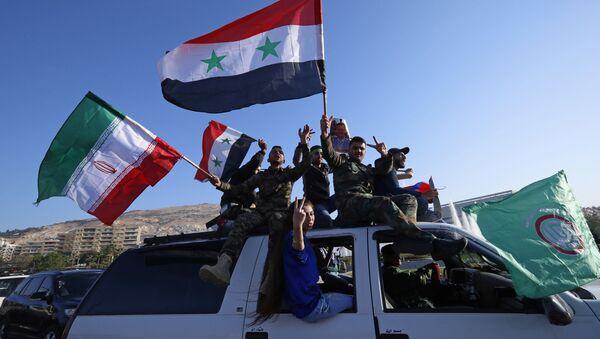 "For four years out of seven years [of the Syrian crisis] we were helping Syria, without the help of any other country… Today, 80 percent of the Syrian territory is free from terrorists… We have to say frankly and openly that [Russian President] Vladimir Putin… and the government of Russia have made a very valuable contribution to ensuring that the legitimate government in Syria could stay in power and the people of Syria could keep their territorial integrity," Velayati said on Friday at the session of Valdai discussion club in Moscow.

Addressing the Syrian conflict, the official also claimed, that Iranian troops would stay in Syria, as they have legitimate right to act in the region, adding that the US-led coalition was operating without permission from Damascus.

"Iran plans to continue its military presence in Syria. I believe, if we leave the country — Russia to leave it next and then the same terrorists will return back again," Velayati stated.

These words were a response to the position of Israel, concerned by the possibility of the Iranian military presence at its borders. Addressing the issue, Israeli Prime Minister Benjamin Netanyahu said Thursday that Israel did not have any problems with the Syrian government and would not intervene in the country if the existing agreements, preventing Iranian forces from approaching the Israeli borders, were upheld.

Trump Adviser Bolton Shifts Tone From 'Assad Must Go' to 'Iran Must Leave Syria'
Iran has repeatedly emphasized that it has no troops in Syria, but has admitted to sending military advisers to assist Damascus in its fight against terrorists. In addition to this, Tehran's presence in the country was authorized by the legitimate authorities in the nation. However, the situation was drawing a protest from Israel, which stressed it won't not allow Iranian forces to stay in Syria and conducted a several airstrikes against alleged "Iranian outposts" on the Syrian territory.

Negotiations Between Washington and Tehran

Velayati also noted, that Iran had no trust for the US administration.

"We do not want to negotiate with the Americans. If they have illusions that we will come to hold negotiations, we do not need this. They are not worthy of addressing them. They in fact violate the obligations on Iran, approved by the UN Security Council. Why should we negotiate with them?" he stressed.

These words were a response to the Donald Trump's statement, that Tehran would "ask him for a deal at some point."

Velayati also called Trump "unpredictable", noting, however, that the upcoming summit in Helsinki would be of great importance.

"As for Trump, and as for the Trump-Putin meeting, yes, we know that such a meeting is planned, but Mr Trump is unlikely to be logical at his summit with Mr Putin. He is an unpredictable man… The meeting, surely, is very important. But the problem is with the other party, which doesn't know what he wants and what he'll do," he said.

On May 8, President Trump announced his decision to withdraw the US from the 2015 nuclear agreement with Iran, which imposed strict curbs on Tehran's nuclear program in exchange for loosening international sanction. The unilateral move was opposed by Ira, Russia, China and the European parts of the deal.