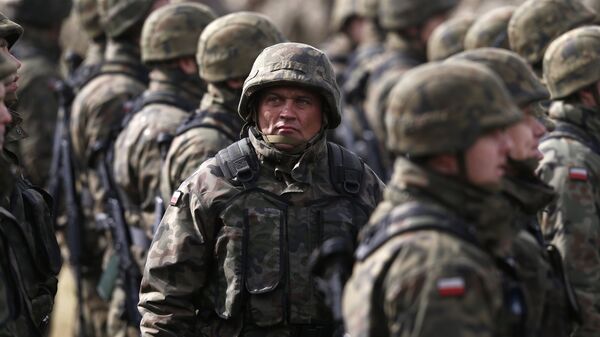 © REUTERS / Kacper Pempel
Subscribe
International
India
Africa
MOSCOW (Sputnik) - NATO member states should focus on the efficiency and combat readiness of their troops, rather than on increasing their respective shares of defense spending, as demanded by US President Donald Trump, a member of the Bundestag's defense committee from the Alternative for Germany party (AfD), Gerold Otten, told Sputnik.

"I do not believe in a benchmark which is linked to a country’s GDP. What counts more in times of hybrid threats, terrorism, and asymmetric warfare, is the efficient use of defensive means in order to secure regional stability. Our priorities should, therefore, be aimed at getting the combat readiness of our existing troops and equipment to a level where the Bundeswehr [the German military] can fulfill its constitutional mission, i.e. to guarantee the safety of Germany and simultaneously honor its obligations to its NATO allies," Otten said.

NATO States Shouldn't Spend 4% of GDP on Defense Amid No Real Threat – German MP
The lawmaker said that he expected Trump to give way to a more realistic approach toward defense spending, given that the US leader frequently raised foreign policy issues with a "verbal bravado" but then gradually came around, eventually considering the interests of all parties involved, as he did with the North Korean issue.

"Why should this be any different, when it comes to his demands concerning the increase in defense spending by European NATO members?" he said.

Trump's requirements are unlikely to be met immediately, with the gradual increase of NATO members' defense spending over the next few years being much more likely, Otten added.

READ MORE: NATO Spending: '2% is Already Not Realistic & 4% is Out of Question' — German MP

He also outlined several priorities, where the increase of NATO capabilities was especially vital.

"More emphasis should be given to the gathering of preventative intelligence, counter-measures concerning cyber attacks and the strengthening of our special forces capabilities," he said.

'NATO is Structured to Defend EU When There's no Need' - Researcher
It is now difficult to predict, whether these issues would cost Germany more than 4 percent of its GDP or less, the politician noted.

On Wednesday, Trump told NATO members during the summit in Brussels that they should raise the defense spending commitment to 4 percent of GDP from the current 2 percent objective.

Germany's military spending, which stood at 1.24 percent of GDP last year, has been a point of contention between Berlin and Washington. Germany's constitutional limits on the military, created in the post-war era to prevent a repeat of Nazi crimes, is often cited as the reason against high military spending.

The Alternative for Germany party (AfD) doubts that the desired effect of both the recently signed EU-NATO cooperation declaration and the earlier Permanent Structured Cooperation (PESCO) on the bloc's defense capabilities will be achieved, Gerold Otten told Sputnik.

"As the strongest opposition party in Germany, the AfD seriously doubts that neither PESCO nor the increased EU-NATO cooperation will have the desired impact on the strengthening of the defensive capabilities of the European Community as a whole," Otten said.

Trump’s Attack on NATO Allies is ‘Payback’ for Endorsing Clinton
Very little has been said about the strategic intent of the EU-NATO declaration, the lawmaker noted.

He added that EU member states may struggle to achieve what has been declared, much due to financial problems associated with the constant influx of undocumented migrants.

On Tuesday, the European Union and NATO signed a second joint declaration on cooperation, which envisages, among other plans, an expansion of EU-NATO cooperation in cybersecurity and countering illegal migration.

PESCO, which outlines 17 projects, was agreed by 25 of the 28 EU member states in December. Its most recent development, signed in late June by six states, was the declaration of intent to create EU rapid reaction teams to counter cyber threats.

Large numbers of migrants have been trying to reach European countries over the last few years, with many using dangerous sea routes and dying while trying to cross the Mediterranean Sea.

In July 2015, the European Union launched Operation Sophia, previously dubbed EUNAVFOR Med (EU Naval Forces in the Mediterranean), aimed at stemming the flow of migrants and refugees from North Africa and the Middle East to Europe through the Mediterranean.