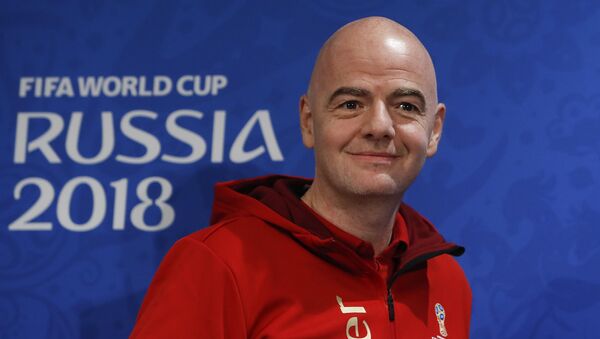 The World Cup has changed the perception of Russia among all countries, as the visitors have discovered a hospitable country, full of people, who are keen to show to the world that what sometimes is said is not actually what happens here, FIFA President Gianni Infantino told reporters.

"It is an incredible, amazing World Cup. From the very beginning of the tournament, we have experienced incredible emotions from being here and in two days the top of all this will be the finals. These couple of years I said that the 2018 World Cup will be the best for all time. Now I can say it again, being convinced that this is the best world championship in history. I would like to thank everyone who was involved in the organization and preparation of the tournament," Infantino said at a news conference.

"I thank all the people in this country who have ensured the optimal hosting of the World Cup, the best of all times. The heart and smile of the World Cup are volunteers, thousands of people who have worked for the organization of the tournament," Infantino noted.

He added that Russia would continue to be a "football country" after the tournament, as football has become an integral part of the country.

"Russia has become a real football country, a country where football is not only the World Cup, which is organized at an excellent level but where football has become part of the country's DNA and the country's culture. This is thanks to the performance of the Russian national team, of course, but also thanks to all the work that has been done, the infrastructure, the stadiums, everything is extremely beautiful and extremely efficient," the FIFA president said.

He praised the players, referees and coaches who took part in the World Cup.

The 2018 FIFA World Cup kicked off on June 14 and will continue until July 15, with the final game between France and Croatia set to be held at Moscow's Luzhniki Stadium.