EU Firms Ask US to Let Them Trade With Iran, Told 'No' – French Fin. Minister 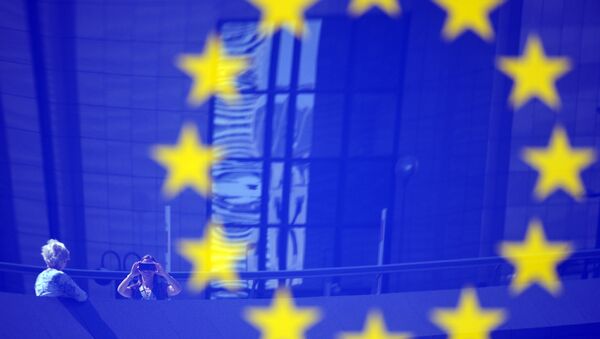 © Sputnik / Alexey Vitvitsky
/
Go to the photo bank
Subscribe
Washington wants Iran’s oil revenues to fall to zero by November, and it is asking Saudi Arabia to make up for the shortfall caused by removing Iran's oil from the world market, CNBC wrote.

The United States has rejected European leaders’ pleas for exemptions after Washington pulled out of the 2015 nuclear agreement with Tehran, French Economics and Finance Minister Bruno Le Maire said in an interview, which appeared in Friday’s issue of Le Figaro.

"This spring I wrote to US Treasury Secretary Steven Mnuchin, asking him to make exceptions for European companies engaged in legal business activities in Iran and grant them waivers. We have now received an answer from the US and this answer is negative,” the French minister said.

Le Maire underscored the need for “urgent measures” to “guarantee the commercial sovereignty of the European Union.”

If Europe 'Bows Down' to US, That Would Mean Iran is Sanctioned by EU - Analyst
He added that Europe needs effective “instruments and autonomous financial networks that would enable it to resist US extraterritorial sanctions.”

“The United States has no right to tell us which countries to trade with!” Le Maire emphasized.

When asked whether Europe should face up to US pressure in other commercial disputes, including increased import tariffs, Bruno Le Maire said that the “commercial war” had been initiated by President Donald Trump. He added adding that a decisive, and proportionate response to it by the EU would be the right way to respond.

“If the US persists with this policy, Europeans will have to take new decisions with regard to this policy,” he noted.

The French minister added that the EU would not negotiate with the US as long as Washington persists with its “unilateral and unfair measures, which fly in the face of international law. “

“Acting otherwise would be tantamount to admitting our weakness and would be against our best interest,” Bruno Le Maire said.

On May 8, President Trump announced his decision to withdraw the US from the 2015 nuclear agreement with Iran, which imposed strict curbs on Tehran’s nuclear program in exchange for loosening international sanctions and sanctions unilaterally imposed by the US and the EU.

Trump promised to bring back old sanctions on November 4 and impose new ones.

The unilateral move by the United States has been opposed by other signatories to the nuclear agreement.

Germany, Britain and France have asked the Trump Administration to provide exemptions for EU companies, as Europe tries to salvage the nuclear deal which it sees as the “best means” to prevent a nuclear-armed Iran.

000000
Popular comments
A fiat Euro pitted against a fiat Dollar. This aught to be disastrous for both of them. Who choreographs these dances anyway?

TLW
13 July 2018, 09:36 GMT1
000000
Just sit tight and sh up Europe and do what we are telling you - the message of US president. It’s more Obvious that US after ww2 installed its pro US vassals in the Europe which do not represent Europeans but US government