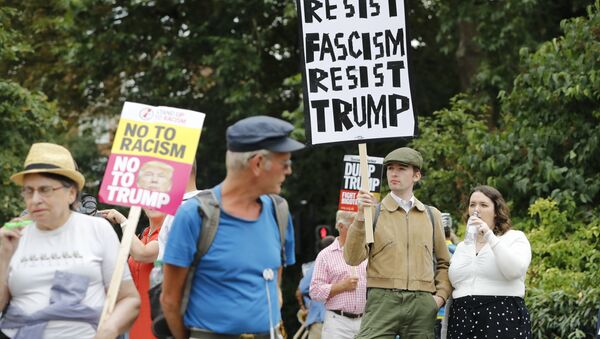 POTUS landed in London Thursday for his two-day visit that includes talks with UK Prime Minister Theresa May as well as an audience with Queen Elizabeth II. Prior to his arrival in the UK, the president shrugged off the notion of anti-Trump protests and declared that he was actually popular among Britons, thanks to his stance on immigration.

"They like me a lot in the UK," he told reporters. "I think they agree with me on immigration… I think that's why Brexit happened."

Trump's declaration comes days after he stated that the UK was in "turmoil" following the resignation of both Foreign Secretary Boris Johnson and Brexit Secretary David Davis.

​Galloway told Radio Sputnik's Loud & Clear on Thursday that if the UK is really in turmoil, "it's partly thanks to his huge motorcade, which just held me up on the way home for an hour."

"He's overpaid, oversexed and over here," Galloway told hosts Brian Becker and John Kiriakou. "He's turned the country upside down, not just physically, because it's a rare state visit that is preceded by a root-and-branch destabilization attack on the government he's come to visit — and that's what he has done."

"The bigger point is that he's over here in Europe acting like Tony Soprano, demanding everyone pony up and double the money on their defense budget, expanding NATO into new countries and generally swaggering around like a thug," he continued.

"No one has ever quite seen anything like it before."

Although much hasn't been confirmed regarding Trump's talking points, Galloway told Kiriakou that the issue of the UK's contribution to NATO, along with Brexit, the UK's departure from the European Union, are likely on the agenda.

"[Trump's] openly stated… that Theresa May's Brexit proposals are not Brexit at all and that that casts doubt over whether Britain can make a trade deal with the United States, because under her proposals we'll remain tied to the apron strings of the European Union for the rest of time," Galloway said. "So, in one way that makes his visit odious, but he will, I'm sure, double down on his double up demand that Britain, which struggles to pay 2 percent of its [GDP] on defense… should be doubled to 4 percent."

But while Trump believes that he's loved in the UK, he should realize that his fanbase could dwindle if he pushes the idea of doubling the country's NATO contributions to 4 percent of its GDP, Galloway quickly warned.

"I tell you this, there are no takers for that in Britain… where people have gone through a full decade of cuts to real wages, massive degradation of public services," he said. "The idea that we should double our expenditure on weapons of war is simply preposterous."

"He's saying that if you don't, we won't protect you anymore. Most people's attitude is that… we don't actually need your protection… you are the biggest danger to the peace of the world and the idea that you want money from us to ensure your protection of us is just about the most unpalatable plate anyone was ever served."

After wrapping up his tour of England, Trump and First Lady Melania Trump will head over to Scotland for the weekend, from which The Donald's family originally hails on his mother's side, and which will also greet him with protests.