'Many Uncertainties': Analysts Explain What Future Holds for UK After Brexit 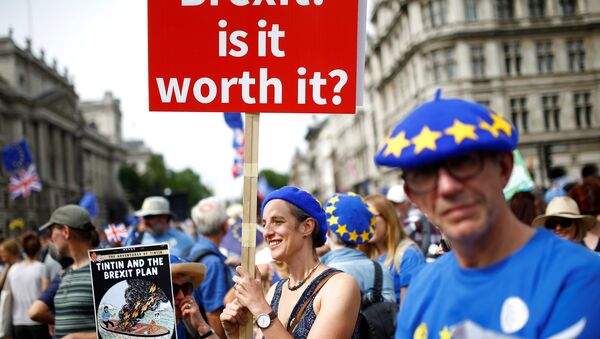 © REUTERS / Henry Nicholls
Subscribe
WASHINGTON (Sputnik) - The United Kingdom’s only recourse for avoiding an economic crisis from a hasty Brexit is to strike bilateral trade deals with key states such as the United States, China and Russia at once to facilitate a gradual pull out, analysts told Sputnik.

On Thursday, President Donald Trump told the Sun newspaper that if UK Prime Minister Theresa May goes forward with her "soft" Brexit proposal it would likely kill any prospects for a bilateral trade agreement with the United States. The comments come ahead of Trump’s meeting with May in London on Friday and in the wake of a ministerial exodus driven by disagreements over the prime minister’s plan.

May’s so-called "soft" Brexit plan — which sees the United Kingdom staying in the EU Customs Union under a facilitated arrangement — has been derided by the "hard" Brexiteers who envisioned a clean break. Earlier this week, UK Foreign Secretary Boris Johnson and Brexit secretary David Davis resigned over May’s compromise proposal for withdrawing from the EU.

"What is needed is a key mechanism in place to allow countries to make a gradual withdrawal from the EU," Winnie said. "If the British can negotiate separate trade agreements with the United States, with China, with Canada and even with Russia — they can find a way ahead."

The final pattern of such agreements could not be determined in advance but the UK government had to move decisively and systematically towards achieving them, Winnie advised.

"There are so many uncertainties in law and in the future patterns of international trade. The British have got to move one step at a time on this," he said.

It remained to be seen whether other countries would be willing to go one on one with the British in making direct bilateral trade deals as they may instead prove to be more comfortable staying with the European Union and its larger market in multilateral agreements, Winnie cautioned.

"The British people themselves are divided and confused. They are uncertain as to what it all means: So many of them have grown up as part of the EU. They don’t remember what life was like before it," Winnie noted.

Retired Brown University Assistant Professor of Economics Barry Friedman told Sputnik the British people had voted to gamble on Brexit exchanging their secure position within the EU for the freedom to set their own limits on immigration and trade.

After Brexit the UK would be free of the EU value-added tax system, Friedman added.

"This could be a big inconvenience to European companies with plants, offices, payrolls and making other financial transactions in Britain. This kind of change could be unfavourable to some foreign companies who will prefer to move offices and factories to Ireland or the continent," he said.

Those developments could reduce the UK’s domestic GDP, Friedman remarked.

"Other local companies will be glad to see the competitors go and may expand production or raise their prices or both," he said.

US President Donald Trump is scheduled to discuss US-UK future trade relations after Brexit in their talks on Friday, according to the Prime Minister’s Office in Downing Street, London.

If May Compromises on Brexit, Further Resignations Will Follow - Broadcaster
The Brexit negotiations between London and the European Union started last year and are due to be completed by the end of March 2019. A model of the future economic partnership between the sides has proven to be one of the most contentious matters both in Brexit talks with Brussels and debates within the United Kingdom, as the recent high-profile resignations in the UK government showed.

The United Kingdom voted to leave the European Union in a referendum in 2016, but the vote left the country divided almost equally into "Remainers" and "Brexiteers."