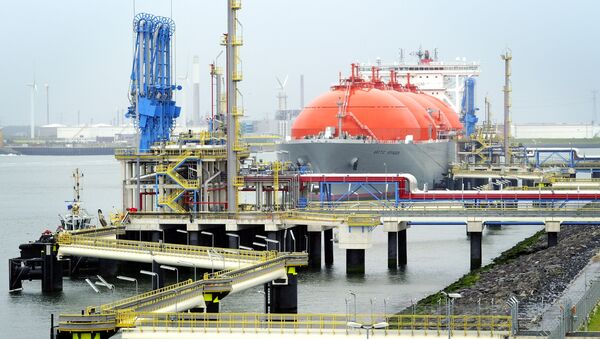 Continuing Russia’s gas transit through Ukraine is of strategic importance to the EU, Maros Sefcovic said in a statement.

According to him, the EU is ready for an increase in LNG trade with the United States.

READ MORE: British Petroleum to Buy US LNG for 20 Years Amid Struggle for EU Market

LNG Suppliers Try to Force EU to Purchase More Expensive Gas - Kremlin
Earlier, Donald Trump criticized Germany over working on the Nord Stream 2 pipeline with Russia and buying Russian oil and gas. US State Secretary Mike Pompeo told the US House of Representatives' Foreign Affairs Committee that the United States should continue to push back against the pipeline project.

In the first quarter of 2017, the United States had become the sixth-largest LNG supplier to the EU.

The Nord Stream 2 gas pipeline project, carried out jointly by Russia's Gazprom and European energy companies, has divided the EU, as some European states argue that Russian gas supplies jeopardize their energy independence. However, Russia has repeatedly stressed that the Nord Stream 2 is a purely commercial project.