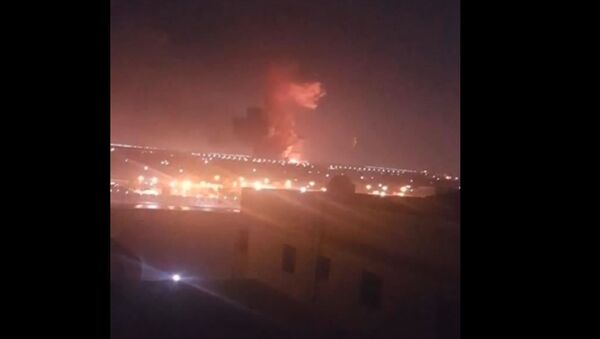 A large explosion ripped through two storage area containing fuel in the vicinity of the international airport in Cairo, Egypt, according to the country's civil aviation minister. The blaze raged for about 45 minutes.

An Egyptian Army spokesman, however, shortly after said that the explosion occurred at a chemical factory near the airport, and was the result of high temperatures. The chemical factory explanation and the fuel tankers reports were both widely circulated on social media after the explosion — it remains unclear whether the two are connected.

At any rate, a large plume of smoke could be seen shooting forth from a location close to the airport, social media reports indicated Thursday. The blast injured three people, an Egyptian official said, though the nature and severity of the injuries have not been spelled out. An official source in Egypt told Sputnik the incident hurt 12 people after reports of three injured.

Flights in and out of the airport were suspended for the time being, Al Arabiya noted.  The Egyptian civil aviation office later disputed this account, saying that air movement was unaffected by the blast.

It seems like the explosion was not at Cairo airport itself but close to it.. My relative took these pictures from his house pic.twitter.com/MJEby6QIt8

This guy says a worker at the airport said it was an explosion at the fuel depot in Cairo airport. Hopefully everyone is alright and it's an accident rather than foul play https://t.co/z9ouxoFAtA

The incident apparently was triggered by the explosion of a fuel depot, local Egyptian media reported, citing "security sources." Egyptian aviation officials confirmed that the incident took place at two depots storing fuel just outside the perimeter of the airport.

​Videos appearing on Twitter showed a blast of fire that sustained for a duration of time; it does not appears the explosion died down after a minute or two. About 40 minutes after reports of the fire began, a TV channel in Egypt reported that firefighters had put out the huge blaze.