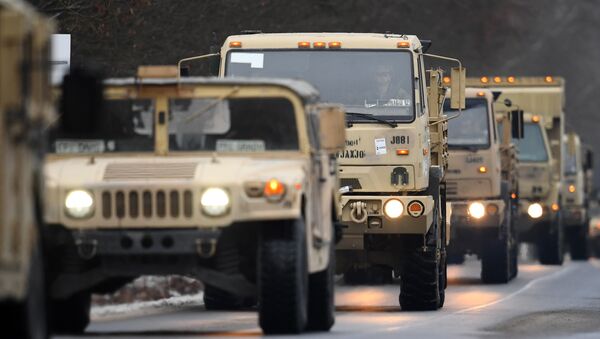 Donald Trump has slammed energy cooperation between Berlin and Moscow, claiming Germany is "totally controlled by Russia" and its gas supplies. Speaking to Sputnik, political activist Anneke de Laaf discussed NATO's prospects under Trump, his upcoming meeting with President Putin in Helsinki, and US pressure on Berlin to renege on Nord Stream 2.

Sputnik: How justified are apprehensions that Trump's pressure on the EU could doom the NATO alliance?

Anneke de Laaf: I don't think there's any real chance of NATO falling apart. I don't think the apprehensions are justified. However, without a doubt, there is some strife between the EU and Washington right now in how they look at things.

But when you look at recent statements by Mr. Juncker for example, he has indicated that the EU will increase defense spending by 22 times. So this seems to indicate to me that the EU is willing to meet the president at least halfway.

World
Trump Aims to Make Disaster of NATO Summit, Sow Discord in Europe - US Senator
Sputnik: Fears have also been voiced about the US withdrawing troops from Europe. What are the chances of this happening, and what could the aftermath be?

Anneke de Laaf: I think the chance of a US withdrawal is absolutely zero. It's not going to happen. The people who have to deal with Trump in these negotiations know that this is not going to happen. In fact, we see the exact opposite of a withdrawal. We see that more troops are being shipped to Europe, not just to the borders with Russia, but other places as well. We see a lot of US weapons coming in; they're being sold all around Europe. So no, I don't think a withdrawal is in the offing anytime soon.

Sputnik: What do you think are the areas where Putin and Trump may potentially agree in their upcoming meeting in Helsinki?

Anneke de Laaf: I can understand that it is a little difficult to see how to move forward. I think the most important thing is that they start taking steps to normalize the relationship, which has been soured to an incredible degree by Mr. Obama and the previous administration.

So the most important and the first priority must be to establish at least normal relations. I think that would be the biggest outcome if they manage to take steps in that direction.

As for cooperation, militarily they have very different views. But we would hope that the kind of cooperation they had before the Obama period would be able to return; [if that were to happen] there would be more coordination. I'm certain that Mr. Putin will try to get more coordination on the front of fighting terrorists, and on Syria. I think that might be one area where Mr. Trump will be happy to find some common ground.

World
Trudeau Calls for 'Firm NATO Response' to Russia Ahead of Putin-Trump Talks
As for the economy, I don't really see any progress there. Russia has been hit by sanctions, and the tariffs that Mr. Trump has inflicted on most of the rest of the world. He might try to cause a rift between China and Russia, but I don't think he will manage to succeed in that.

Sputnik: What are your thoughts about Nord Stream 2? We've seen the pictures this morning with President Trump voicing his concerns over Germany's supposed over-reliance on Russian energy. Chancellor Angela Merkel's government faces some intense pressure that the US administration is bringing to bear on the country. What do you think the outcome is going to be for Nord Stream 2? Does the project have a future?

Anneke de Laaf: I think it can, but it will very much depend on how strong Mrs. Merkel is, and I don't think she is particularly strong when it comes to pressure from Washington. We've seen it in the past. She's kind of caught between a rock and a hard place, because German industry demands that Nord Stream 2 goes ahead. They need it in order to be able to thrive and to grow.

World
Jens Stoltenberg Says Nord Stream 2 Not NATO's Business
So she really has no options to say no to. If it's 'no' to Nord Stream 2, then a reliable alternative will have to be put in place. And it's hard to see what alternatives are available, because the Americans are saying they have an alternative, but of course it's far more expensive, far more cumbersome to get the energy resources to Europe. So that's not really a realistic alternative.

So I see some trouble ahead for this project, and some continued problems also for the EU-Washington relationship, especially for Germany, which seems to be taking a lead in the Nord Stream 2 project.

Anneke de Laaf is a Dutch political activist, journalist and political observer specializing in European politics.  The views expressed by Ms. de Laaf are those of the observer and do not necessarily reflect those of Sputnik.