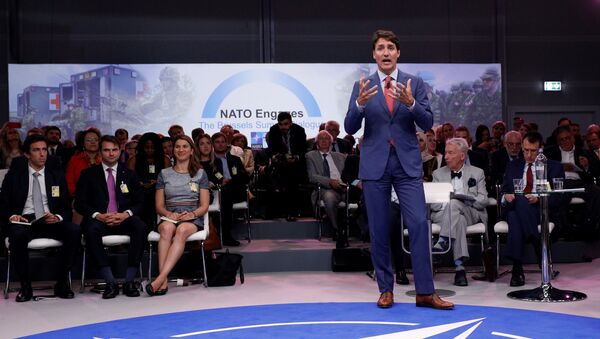 © AFP 2022 / GEOFFROY VAN DER HASSELT
Subscribe
The Canadian prime minister earlier called on the alliance to present a "clear and firm response" to Russia over Moscow's alleged role in the Skripal poisoning case, the 2014 Ukrainian crisis and Crimea's reunification with Russia, which he called an "invasion."

"A lot of people talk about the 2%, but announcing inputs isn't nearly as important as demonstrating outputs," Justin Trudeau said Wednesday at a NATO event, taking a swipe at President Donald Trump's demand that the alliance shell out more for defense.

"You can try and be a bean counter, but the fundamental question is: is what you are doing actually making a difference?" Trudeau added.

White House Confirms Trump Asked NATO Members to Increase Defense Spending to 4%
Ottawa, Trudeau said, would have to increase its defense spending by 70 percent over the next decade. "But we don't just talk about the costs, we talk about the capability and we talk about the contributions. It also comes to commitments: an ability and a consistency in being there and stepping up regularly in tangible ways," he noted. Canada presently spends about 1.3 percent of its GDP on defense.

The NATO alliance is "as necessary now as it was at the height of the Cold War," Trudeau said. "It is as necessary now to promote the peace, security, and strength of our true democracies and those democratic principles, which are under threat everywhere around the world it seems."

In a second veiled jab against Trump, as well as European countries, which have elected governments promoting firmer immigration controls, Trudeau said that NATO needs "to recognize that the rise of populism, aggressive nationalism, or polarization in our public discourse … needs to be responded to with strong, confident, positive, rational messages about how we can solve these challenges together."

Trudeau's remarks at the NATO summit follow his trip to Latvia on Tuesday, where he promised to extend and expand the Canadian military presence in the NATO battalion deployed in the Baltic country.

WH Found Out About Trump-Trudeau Phone Talks From Canada - Report
Canada's relations with its US ally have taken a turn for the worse in recent months amid a growing trade conflict between the two countries, as well as the prime minister's personal animosity toward President Trump, who called Trudeau "very dishonest" and "weak" after last month's G-7 summit.

Trudeau spoke with Trump on Wednesday on the sidelines of the NATO summit about the trade conflict, in which Canada introduced $12.6 billion in tariffs on US goods in response to Washington's steel and aluminum tariffs. Ahead of the meeting, Trudeau told reporters that he looked forward "to having words with President Trump."