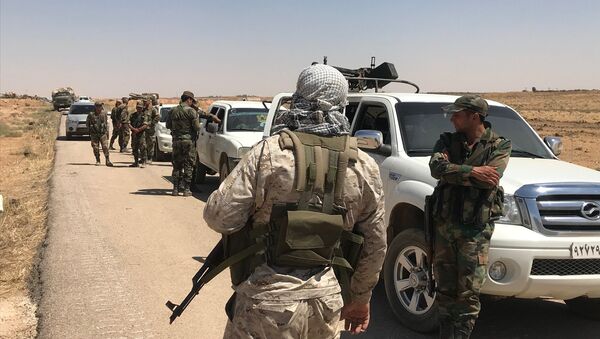 © Sputnik / Mikhail Alaeddin
/
Go to the photo bank
Subscribe
Late last week, the Russian Reconciliation Center for Syria announced that the leaders of armed groups in southern Daraa province had agreed to surrender weapons and halt hostilities amid the Syrian Army's ongoing offensive in the area. Daraa is part of a de-escalation zone agreed upon by Russia, the US and Jordan in July.

The systems, which were made by the state-run French arms manufacturer Nexter, have reportedly been found in the village of Jadal in Daraa.

The TOW missiles were discovered along with mortars, shells of various calibers, improvised explosive devices and communications and night-vision systems.

Last week, the Syrian Army discovered a huge cache of Western-made weapons, also in Daraa. The cache contained weapons and ammo of various calibers, as well as boxes of supplies delivered to Free Syrian Army (FSA) militants from the United States.

In another development last week, the Syrian Army announced the liberation of the Nassib border crossing near the Jordan border amid reports that government forces had found three tanks, two air defense guns, as well as 40 anti-tank missiles, rocket launchers, a number of small arms and 1,500 ammunition boxes in the city of Izra in Daraa.

Syria's Daraa: Why is Its Liberation So Important and What Comes Next?
Nassib's liberation came as Abu Shima, head of the information center of the joint operations command of the opposition in the south of Syria, told Sputnik that the leaders of armed groups in Daraa had clinched an agreement  with representatives of Russia "on the immediate cessation of hostilities" in the province.

The Syrian Army launched an offensive in Daraa after its capital and several other cities were shelled by local militants despite an ongoing ceasefire reached with the help of the Russian Reconciliation Center for Syria, and the situation in the province has escalated in recent weeks.